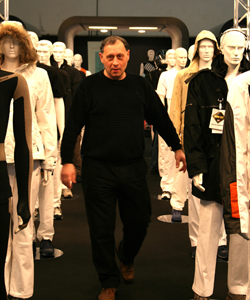 Born on March 7, 1948 in Odessa.
Graduated from Kharkiv Engineering and Economics Institute and worked for 16.5 years as an engineer at the Odessa plant of milling machines.
Published in local, republican, all-Union papers, for example Odessa newspapers “Seaman”, “Banner of Communism”.

Regularly participated in exhibitions, won at many festivals and competitions.

Held several solo exhibitions in the leading museums of Odessa.
In 1987 he founded the Odessa All-Union cartoonist club “LINE”. As part of the club held a lot of promotions, exhibitions.
At the beginning of the 90s he created the lyric-ironic author’s publication “Greetings from Odessa” – a more or less independent, inflexible, for a few million readers, the MONTHLY MONTHLY.
In 1996, “Greetings from Odessa” won an award at the international festival of journalists. The publication was part of the city’s souvenir program “HELLO FROM ODESSA”, the artistic director of which was Mitnick. Under the appropriate trademark, local enterprises produced the most recognizable and favorite varieties of products: vodka, beer, champagne, chocolates, tea … The goods were accompanied by cheerful words and wishes. Thus, all these products could not only be eaten, drunk, but also read …
In late 2002, he moved to Germany. In May 2007, together with the club “CARTUNION” in the main church of Hanover, organized an international exhibition of cartoons dedicated to the memory of Anna Politkovskaya. Recently, keen on photography. Held several solo exhibitions (caricature, photography, plastic).