One of the first, and sometime the only, things people think about when they hear the name Bill Mauldin is World War II. His characters Willie and Joe, created for the 45th Division News in 1940, extended to the Mediterranean edition of the Stars and Stripes in November 1943. Mauldin officially transferred to the Mediterranean edition of Stars and Stripesearly in 1944 and his editor arranged for syndication by United Feature Service as Up Front at the same time. He won his first Pulitzer for cartooning in 1945.

Mauldin always called it as he saw it. During the war that led him to more than one confrontation with the military brass, including a famous one with General George Patton. In 1944, while technically AWOL in Paris, Mauldin was set up to meet the famous general who did not appreciate the scruffiness of Willie and Joe. In March 1945, he drove up to Luxembourg, to Patton’s quarters. Mauldin recounts the meeting in The Brass Ring, in which Patton harangued him:

“Now then, sergeant, about those pictures you draw of those god-awful things you call soldiers. Where did you ever see soldiers like that? You know goddamn well you’re not drawing an accurate representation of the American soldier. You make them look like goddamn bums. No respect for the army, their officers, or themselves. You know as well as I do that you can’t have an army without respect for officers. What are you trying to do, incite a goddamn mutiny? You listen to me sergeant, the Russians tried running an army without rank once”…. “Sergeant,” he said, “I don’t know what you think you’re trying to do, but the krauts ought to pin a medal on you for helping them mess up discipline for us.”

Mauldin was permitted to speak his mind to Patton. As he left the general’s office, he found Will Lang perched outside. “I said Patton had received me courteously, had expressed his feelings about my work, and had given me the opportunity to say a few words myself. I didn’t think I had convinced him of anything, and I didn’t think he had changed my mind much, either.” 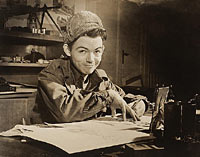 “Bill Mauldin at work: Cartoonist Bill Mauldin, in his fur-lined mountain cap, surrounded by his combat trophies, sits in his office on the fourth floor of Il Messagero building in Rome-one floor above the main editorial offices of The Stars and Stripes. Bill mostly worked at night, until the wee hours, on drawings made from innumerable sketches made up front with the combat troops. Here, drawing with his left hand, he takes time out to grimace at the intruding photographer.” 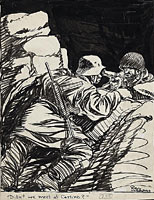 Mauldin earned at Purple Heart at Cassino. He did not spend all of his time cartooning and working for the 45th Division News during the war. He made sure he spent time with K Company, his fellow infantrymen. In fact, around Christmas 1943, while sketching at the front, a small fragment from a German mortar hit his shoulders, as he noted in The Brass Ring, “My only damage was a ringing in my ears and a fragment in my shoulder. It burned like a fury but was very small. The wound hardly bled.” Mauldin received a Purple Heart for his injury, and when he protested that he had “been cut worse sneaking through barbed-wire fences in New Mexico,” the aid told him to take the medal, which might get him discharged earlier at the end of the war.