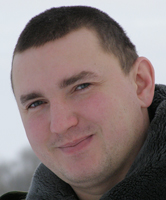 He was born on April 30, 1979 in Severomorsk, Murmansk region.
Since 1993 he lives in the Penza region.
In 1999 he graduated from the Nizhnelomovsk Electromechanical College.

His first drawing was published in the local press in 1999.
2001-2004 — He worked with the Aphrodite Publishing House (Izhevsk).
His works were published in a newspapers and magazines of that publishing house and other periodicals.

Since 2010 he takes part in an international cartoon contests. He is mentioned in a catalogs of several exhibitions in Portugal, Hungary, Russia.

He took the 2nd place in the Antiterror web-competition of the Great Encyclopedia of Cartoons, 2011.