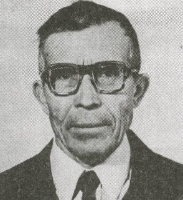 In 1932 to 1939 . Nikolai studied at the Pankley seven-year school, then continued his studies at the Yuskasinsky secondary school of the Alikovsky district of the Chuvash ASSR (now Morgaussky district of the Chuvash Republic), which he graduated from in 1942. While still at school, from 5th to 10th grade, he was the permanent editor of the school wall newspaper, and also regularly participated in the release of the collective farm wall newspaper. In October 1939, he joined the Lenin Youth Union, where he systematically carried out Komsomol assignments.

In 1943, N. Yakovlev was called up to serve in the ranks of the Workers’ and Peasants’ Red Army. While in the 10th Anti-aircraft Artillery training regiment in Kuntsevo, Moscow region, he received a specialty of a military radio operator. As a radio operator under the commander of the anti-aircraft artillery division, he took part in the defense of Kiev, Zhytomyr, Fastov and other cities. After the war, from November 1945 to July 1950, he served in the Transcaucasian Military District.

After being dismissed from the ranks of the Workers’ and Peasants’ Red Army, Yakovlev returned to Chuvashia again. In September 1950, he entered the Cheboksary Art School. At the same time, from October 1950 to March 1951, he worked as a cultural mass worker in the peasant’s house. Due to the difficult financial situation for the 1951-1952 academic year, he had to interrupt his studies. At that time he worked as a technician-operator of the electrical logging batch No. 5 of the Ministry of Geology of the USSR, and since September 1952 N.L. Yakovlev again continued his studies at the art school. Being in the 3rd year, in 1954, he began to participate in the publication of satirical corners in the republican newspapers “Soviet Chuvashia” and “Communism Yalav” (“Banner of Communism”), in which he placed his first cartoons, friendly cartoons, various sketches, drawings that delighted readers. Since that time he has been a permanent employee of the press. In December 1955, he joined the Communist Party of the Soviet Union.

Nikolay Lukich was a participant of numerous international, All-Union and republican exhibitions. He was the author of a huge number of creative caricature works, including: a series of satirical drawings in the magazine “Kapkane” (1956-1991), posters on international and heroic-patriotic themes, on the fight against drunkenness (1976-2005), friendly cartoons on figures of Chuvash artistic culture (1960-1980), graphic portraits of veterans of the Great Patriotic War, workers home front and veterans of labor (1991-1996), collection of cartoons “Healing by Reproof” (1984). N. Yakovlev is the author of books, essays and memoirs: “Sormin Stars” (2006), “The Thorny Path of the Artist” (2007), “Patterns of Life” (2008), etc.

After taking a well-deserved rest, N. Yakovlev in 1995, on his own initiative, created and opened the Pankley Museum of Local History in the village of The Lower Pancleys of the Morgaushsky district of the Chuvash Republic.

The merits of N.L. Yakovlev were awarded with high state awards: the Order of the Patriotic War of the 2nd degree and 12 medals.

Nikolai Lukich was a full member of the Chuvash People ‘s Academy,

a member of the Union of Journalists of the USSR,

a member of the Union of Chuvash Artists.

He was also awarded the titles:

“Honored Worker of Culture of the Chuvash ASSR”,

“Honorary Citizen of the Morgaushsky district”.