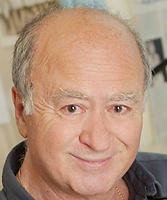 Georges Wolinski (28 June 1934 – 7 January 2015) was a French cartoonist and comics writer. He was killed on 7 January 2015 in a terrorist attack on Charlie Hebdo along with other staff.

Georges David Wolinski was born on June 28, 1934 in Tunis, French Tunisia. His parents, Lola Bembaron and Siegfried Wolinski, were Jewish. His father, who was from Poland, was murdered when Woliski was two years old. His mother was from Tunisia. He moved to metropolitan France in 1945, shortly after World War II. He started studying architecture studies in Paris, but dropped out to take up cartooning.

Wolinski began cartooning for Rustica in 1958. Three years later, in 1961, he started contributing political and erotic cartoons and comic strips to the satirical monthly Hara-Kiri. During the student revolts of May 1968, Wolinski co-founded the satirical magazine L’Enragé with Siné. He served as the editor-in-chief of Charlie Hebdo from 1961 to 1970. In the early 1970s, Wolinski collaborated with the comics artist Georges Pichard to create Paulette which appeared in Charlie Mensuel and provoked reactions in France during its publication. Wolinski’s work appeared in the daily newspaper Libération, the weekly Paris-Match, L’Écho des savanes and Charlie Hebdo. In 2005, he was the recipient of the Grand Prix de la Ville d’Angoulême at the Angoulême Festival.

He was killed on 7 January 2015 in a terrorist attack on Charlie Hebdo along with other staff.