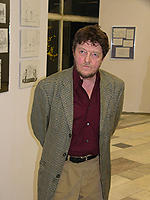 Fedor Vico was born on November 9, 1944 in the eastern Slovak village Šapinec (today part of Okrúhle). He studied at Applied art high school in Bratislava.

He started to co-operate with humoristic magazine Roháč, for which he created a popular figure Jánošík. The Jánošík serial was publicated as a book in 1969. Because he also criticised a political situation in the book, he had to stop working as an author for several years until 1975. After 1975 he could only work in regional magazines. He chose to work for Nove žitja, where he publicated Rusyn seria Iľko Sova from Bajusov (Il’ko Sova z Bajusova). Later he continued to contribute Iľko Sova from Bajusov to Narodny novinky (Rusyn newspaper). He also made cartoons for Slovak SME and Czech Lidové noviny.
Prizes:
•    Slovak literature fund prize
•    The prize of city Prešov
Other activities:
Vico is a vice-chairman of Rusínska Obroda (Rusyn Revival, non-governmental organisation). He was among the six people featured in the 2006 documentary film Iné svety (Other Worlds) directed by Marko Škop.