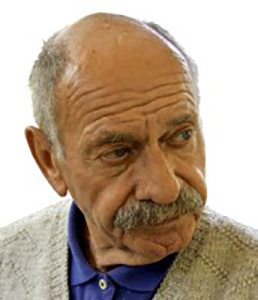 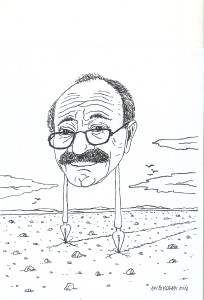 Rasto Visokai was born on August, 30, 1941 in Preshov, Slovakia. He studied at the Secondary School of Mechanical and Electrical Engineering in Kosice and at the Education Faculty of the University in Presov. First exhibition of his drawings on the theme “anatomy” was held in 1966 in Prague. He began to publish his works in the Student Prague magazine in 1967. Later he drew for many newspapers and magazines, but after the occupation of Czechoslovakia they stopped publishing his drawings. In 1968 for the first time he was participated in a national cartoon exhibition in Pisek. In 1971 he started drawing for Rohac magazine where later he published most of his works. As a main author of Rohac he participated in many exhibitions in the country and abroad (Poland: Warsaw, Lodz, Hungary: Budapest, Cuba: El Banos, Germany: Berlin; Bulgaria: Gabrovo). His drawings were also published inmany foreign magazines like the Pardon, the world famous German satirical magazine. Several of his artworks puchased to the City Gallery collections of Bratislava. After he left the Rohac he drew for the magazines like Bumerang, Arena, Literary tyzdennik, Domino Forum. He participated in numerous group and solo exhibitions. His artworks have won several awards: 1995 – Golden Keg Slovakia – 3rd Prize; 1996 – Golden Keg Slovakia – Grand Prix, 1997 – Cartoon Biennale Pisek, Czech Republic – Honorable Mention, 1998, 2005-2008 Knokke Heist, Belgium and 2011 – Kruishoutem, Belgium – exposition of the best drawings.
In 2004-2012 he lived in France for the family reasons, and almost quit to draw. After returning to Slovakia Rasto Visokai participatd in the International Cartoon Exhibition in Smolenice organized by the Trnava University of Cyril and Methodius, Slovakia. In 2012 and 2013 he exhibited in Presov. Currently Rasto Visokai lives and works in Kosice, Slovakia.