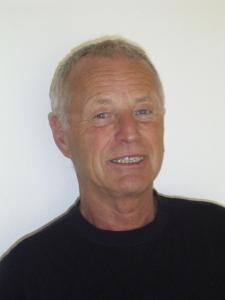 He was born in 1949 in the Maryvka village in the North-Kazakhstan region. He graduated from the Kazakh State University. He worked in Kazakh and Russian newspapers and magazines. He was published in the magazines like Neva, Prostor, Musaget, Knigolyub, Our Street, Friendship of Peoples. In 1992 he was published the story “Sun shower in the Novostavka” in the Neva, in 1993 “Sacrificial donkey” in Prostor. Since then, mostly in these magazines, about two dozen of his stories have been published. Three books were published: “Treebreaker”, “Country without scoundrels”, “White Hole”. The fairy tale “Draw me a golden heart” and the story “Leszek” from the first book were included in the textbook “Russian Literature” for the 5th grade of Kazakh schools. He was a laureate of Soros competitions in the Modern Play nomination (“Ark-transit, or It’s the time to build a boat”) and the Modern novel (“Mammoth’s tooth”).
He is a laureate of the international contest “Russian Award” (2005). In 2006, he became a laureate of the Russian Prize for the story “A Man Without a Name”. He is a finalist of the Yasnaya Polyana literary prize (2007). Lives in Alma-Ata.