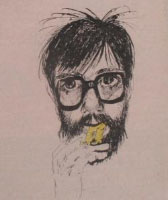 In 1950-1954 he studied at the Higher School of Applied Arts in Bratislava. In 1982-1985 he graduated from the Journalism faculty of the Institute of Arts in Bratislava. His paintings are in the collections of museums in Warsaw, Basel, and Gabrovo …
Published his comic in the weekly Olenya all his life. He became famous as a successful author of a cartoon, for example, when his 14 part – Ceruzkine – literally went around the world. Last years of his life he devoted to painting. Held his solo exhibition of paintings in Liverpool. His short cartoons in our difficult times are popular on YouTube.
Later time was working and living at the vineyard (in Pezinku), where he was visited by Guillermo Mordillo, who came to Slovakia to meet with him after he saw his work at an exhibition in Turkey.
He died after a brief illness in Hágoch December 9, 2011.