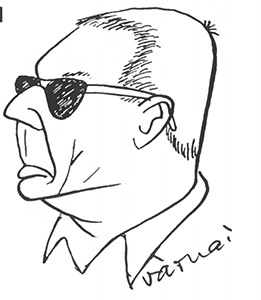 Born in 1921 in Budapest. He graduated in Graphic Design from the Institute of Applied Arts. After the war he published his drawings in satirical press.
For several years since 1951 he collaborated with the director Gyula Mashkas in making an animated and advertising films. He revealed himself not as an artist only but as a screenwriter as well. Some of the films  (“The Duel” and “Romantic History”) won first prizes at the festivals in Budapest and Miskolc.
He worked in the Ludash Mati magazine since 1957. In 1965, the collection of his cartoons called Still Life was published.
Besides Ludas Mathi, his works were regularly published in the Ludash Magazine and the Hungarian Nation newspaper.
He was awarded with the Munkachi State Prize for his drawings and the Bela Balazh Prize for the animated films.
He participated in many group cartoon exhibitions in the country (in Budapest, Szeged and other towns) and abroad (in Montreal, Brussels, Krakow, West Berlin).
His personal exhibition was held in Sarvar in 1982.