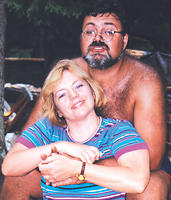 Born in 1959 in Tatarstan.
He is an oil engineer and works in the Oil and Gas Ministry.
Drawing is his passion throughout his life.
His first picture was published in 1986 in one of the most popular Russian newspaper. From that time thousands of his cartoons were published in many newspapers and magazines in Russia and abroad.
Nowadays he can’t live a day without drawing a cartoon.