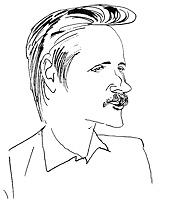 Born in 1963. He graduated from Moscow Energetical Institute.

He managed to work as a draftsman, technician, watchman, radioengineer and tool-maker’s learner. He made his debut as a cartoonist at the age of 19. Participant of cartoon exhibitions in 17 countries. He won many prizes in competitions in Russia and abroad. He cooperates with BBC corporation, press of Bulgaria, Czech, Slovakia, USA, Israel, TV and broadcasts, teams KVN and many Russian newspapers and magazines. Also he is known as a satirical writer. He is the author of the Not only about sex (Moscow, 1994 and 1996, New York, 1996); «Zanesite menya v protokol”  (Moscow, 1996).