Vanderbeek studied art and architecture at Cooper Union in Manhattan, and then moved to Black Mountain College in North Carolina, where he met polymath Buckminster Fuller, composer John Cage and choreographer Merce Cunningham. Starting in 1949, he took two semesters of photography courses with Hazel Larsen Archer at the institution.

In the 1950s, he made independent feature films while studying animation techniques and painting sets and sets for Winky Dink and You. His earliest films, shot between 1955 and 1965, mainly consist of animated pictures and collage films combined into a form of organic development.

VanDerBeek’s ironic compositions were created very much in the spirit of Max Ernst’s surrealist and Dadaist collages, but with a wild, rough informality more akin to the expressionism of the Beat generation. In the 1960s, Vanderbeek began working with artists such as Clas Oldenburg and Jim Dine, as well as with representatives of modern dance and extended cinema, such as Merce Cunningham and Elaine Summers. At the same time, he was creating a show using multiple projectors at his Movie Drome cinema in Stony Point, New York. Movie Drome was a grain silo dome, which he turned into his “endless projection screen”. Visitors entered the dome through a trapdoor in the floor, and after entering they were asked to spread out on the floor and lie down with their feet to the center. Once inside, the audience experienced a dynamic mutual scattering of films and images around them, created by more than a dozen slide and film projectors filling the concave surface with a dense collage of moving images. These presentations contained a very large number of random sequences of images and sequences, as a result of which none of the presentations were the same.

His desire for utopia led him to collaborate with Ken Knowlton at Bell Labs, where dozens of computer animated films and holographic experiments were created by the end of the 1960s. Among them is Poem Field (1964-1968), a series of eight computer animations.

During the same period, he taught at many universities, exploring new methods of representation, from steam projections at the Guggenheim Museum to interactive television broadcasts of his “Sonata of Violence”, broadcast on several channels in 1970. He directed the University of Maryland in Baltimore. The county’s fine arts program until his death. 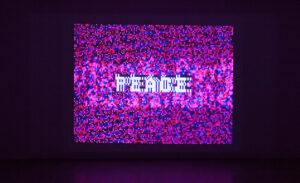