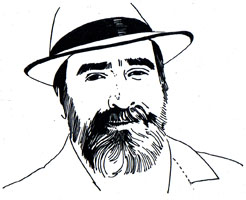 Was born in 1936.
He is an Honored Artist of the Estonian SSR (1979).
Acquired fame as a cartoonist.
His first cartoon was published in 1955 in the Harju Elu regional newspaper.
Since 1957 his works have been regularly published in the Picker magazine. He is an active member of his editorial board. He is a chairman of the committee of cartoon exhibitions.
His cartoons were published in many republican satirical magazines, as well as satirical magazines in Poland, Yugoslavia, Finland, Czechoslovakia, Bulgaria, Hungary, Germany, Italy and the USA.
He is the author of the “Chao, Carly!” and “Cartoons” cartoon collections.
He held several personal exhibitions ans took part in international cartoon exhibitions in Tallinn, Moscow, Riga, Vilnius, Yerevan, Chisinau, Baku, Kiev, Togliatti, Istanbul, Knokke-Heist, West Berlin, Gabrovo, Marostica, Szczecin, Skopje, Ljubljana, Sarajevo.
Awarded in Tallinn (1976), Vilnius (1978), Knokke-Heiste (1976), Istanbul (1977) and West Berlin (1980).

A series of Masters of the Soviet cartoon (Soviet Artist, 1989)