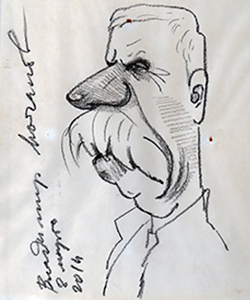 Cartoonist, painter, decorator, designer, journalist
Born in Ufa (Bashkortostan) on May 11, 1950.
He was graduated from the Painting Department of the Penza Savitsky Art College in 1974. Then he worked as a graphic designer in a various organisations in Penza.
In 1977 he moved to Moscow where continued working as a graphic designer and decorated churches in Tambov, Belgorod and Stary Oskol.
His first cartoon was published in the Ufa regional satirical magazine Khanek (“Pitchfork”) in 1967. He published in major Moscow magazines and newspapers like Krokodil, Smena, Ogonyok, Krestyanka, Izvestia, Trud, Rabochaya Tribuna, Komsomolskaya Pravda and also in many regional periodicals of the Soviet Union.
From 1986 to 1995 he actively participated in an international and all-union cartoon competitions. He became a laureate of more than 35 of them. He was a nominee for the Golden Ostap festival (Bronze Ostap, St. Petersburg, 1995).
In different years he worked as an artistic director in a theatre and cinema companies, as an art editor in the First of September newspaper and the Otchizna and Vokrug smeha magazines (Moscow) where he also hold the post of co-editor. He was a leading artist in the Nachalnaya shkola and Izvestia newspapers. He organised a four all-union cartoon contests “Man and Production”, “Oh, youth”, “What? Where? When? ” and ” Aviation and Security “.
In 1991 Marat became an author and a director of the short comic film “Comic-Video” (Videofilm).
In 1996 -1998 he was a co-founder of ZAO “Cartoon House”.
He held three cartoon contests  “Antiterror” (2010), “Does my police protect me?” (2012) and “Doloy!” (2017) on the occasion of the 100th anniversary of the October Revolution.
He is an amateur photographer and a collector of ornamental design, a compiler of a many ornament collections. He edited and republished on CD an art collection of 1916 “The School of Fine Arts”.
In 2005 he moved to Spain.
Since 2007 he is a founder and a chief editor of cartoonia.ru — The Big Cartoon Encyclopedia.
He is a member of the Creative Union of Russian Artists.
Personal exhibitions:
Exhibition of Cartoons — Barcelona, 2013
Exhibition of Cartoons — Lloret del Mar, 2013
Exhibition of Abstract Painting and Graphics — Barcelona, 2015
Exhibition of Abstract Painting “The Improvisation” — Barcelona, 2016
Exhibition of Abstract Painting “The Expression” — Barcelona, 2016.