Unk White was an Australian cartoonist, illustrator and painter, known under the penname Unk White. Born in Auckland, New Zealand, he came to Sydney in 1922 with the artists Joe and Guy Lynch. He became a well known member of the bohemian art scene, and contributed regularly to magazines like the Melbourne Punch, The Bulletin, Smith’s Weekly and Beckett’s Budget. He is the creator of the comic strips ‘Freckles’ (1928) and ‘The Adventures of Blue Hardy’ (for Pix magazine, 1938). In 1944, he became an official war artist and served in the RAAF and Royal Navy in New Guinea, the Pacific and Japan. 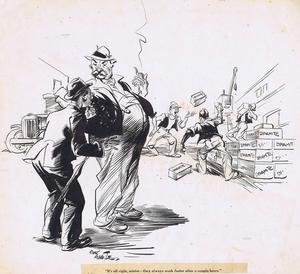 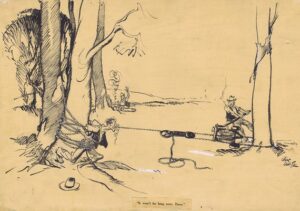