He is best known for his characters Oor Wullie and The Broons; comics featuring them have appeared in the Scottish newspaper The Sunday Post since 1936, along with annual collections. Watkins has also illustrated comics such as The Beano, The Dandy, The Beezer and Topper, as well as illustrated Christian stories. Watkins was posthumously inducted into the British Comic Awards Hall of Fame in 2015.

Watkins was born in Prestwich, Lancashire, England, although the family moved to Nottingham when he was still an infant. His father was a lithographer who noted the boy’s early artistic talent and made sure that he received additional drawing lessons at the Nottingham School of Art. By the age of 10, the local newspaper declared him a “school genius.” He studied at the Nottingham School of Art and, while working for Boots Pure Drug in the early 1920s, Watkins’ first published works appeared in Boots’ employee magazine The Beacon.

In 1924, Watkins entered the Glasgow School of Art. In 1925, the headmaster recommended Watkins to the prosperous publisher DC Thomson of Dundee. Watkins was offered a six-month employment contract with DC Thomson, so he moved to their base in Dundee and began providing illustrations for Thomson’s “Big Five” stories for boys (Adventure, Rover, Wizard, and then Skipper and Hotspur). A temporary job turned into a full-fledged career; For several years he was just another illustrator, supplementing his small salary by teaching illustration at Dundee College of Art from 1934 to 1938. In 1933, Watkins started creating comics, and soon his editor noticed that Watkins had a special talent as a cartoonist. In 1933 he drew The Rover Midget Comic, and in 1934 he drew The Skipper Midget Comic. In 1935, Watkins’ first regular comic, Percy Ver and His Trial Tricks, appeared; the main character was an inept magician whose tricks usually had unpleasant consequences for him. The tape lasted for almost two years, and finally it was replaced by another Watkins creation, “Wandering Willy, the Cunning Explorer” (Willy’s cool characteristics would later reappear in the form of “Desperate Dan”). While Percy was still appearing in The Adventure, Watkins, along with writer and editor R. D. Lowe, created his most famous characters, Ur Woolley and The Broons. They were part of the first issue (March 8, 1936) of the weekly eight-page excerpt “Entertainment Section” of The Sunday Post. Soon he began illustrating the tape “Desperate Dan” for the comic strip “Dandy”, released in December 1937.

His workload increased further when DC Thomson created The Beano, an eight-page comic book booklet, and Watkins was responsible for drawing the Lord Snooty tape. The first edition of The Beano was dated July 30, 1938. When Beezer and Topper were released in the 1950s, Watkins was responsible for illustrating the Ginger strip (mostly based on Oor Wullie, but unlike this strip, the text was written in standard English, not Scottish) and the Mickey Monkey strip for two comics.

Watkins’ longest-running adventure film was Jimmy and His Magic Patch, which debuted in the January 1, 1944 issue of Beano magazine and lasted 18 years.

Watkins was one of two DC Thomson cartoonists who signed their works (starting in June 1946), who were known for their intricate details and unique style. Another cartoonist who signed his work was Allan Morley, and he did it first.

He was a devout Christian and an ardent supporter of the Church of Christ in Dundee (where he met his wife). He provided illustrations for mission calendars, and since 1956 he has produced (for free)[2] the comics “Wilhelm the Warrior” and “Tony and Tina are Twins for a Young Warrior”, a children’s newspaper published by WEC Publications. These strips, filled with quotations from the Holy Scriptures, were collected in a series of booklets. In March 2008, Watkins’ watercolour of the Crucifixion was discovered in a house in Lochgelly, Fife.

Watkins and his wife built a substantial house in Broughty Ferry, which he named Winsterly. He continued to work with DC Thomson for the rest of his life. On August 20, 1969, he was found dead behind a drawing board as a result of a heart attack.

Evidence of Watkins’ work is that DC Thomson continued to reprint the Oor Wullie and Broons strips in The Sunday Post for seven years before a replacement was found. Watkins’ Desperate Dan strips were reprinted in The Dandy for fourteen years.

In a 2006 BBC documentary celebrating the 70th anniversary of Ora Woolley, it was claimed that because of his frequent mockery of Axis leaders in his comics before and during World War II, Watkins’ name was on the list of enemies of the Third Reich. 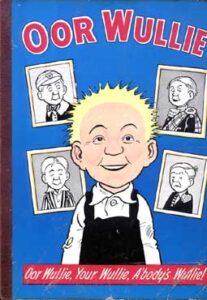