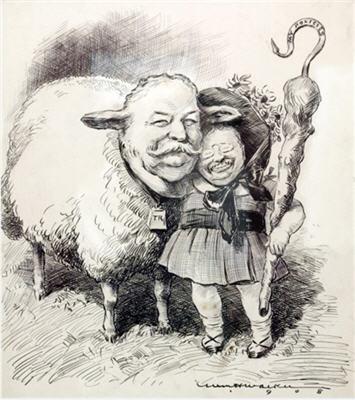 It is important to note that Walker’s works are often confused with those of his British counterpart, an artist known as “W. H. Walker,” who worked primarily as an illustrator of children’s books in Great Britain during the early years of the 20th century.  The British Walker worked in an art nouveau style, often employing bright colors, which is very unlike the works produced by the American cartoonist “William Henry Walker” who only turned to color work late in his life (after 1923).  The British Walker is best known for his illustrations associated with Lewis Carroll’s “Alice in Wonderland.”

William Henry Walker contributed political and satirical cartoons to many American publications, including Life Magazine (staff contributor beginning in 1898), Harper’s Weekly, and the New York City newspapers the New York Evening Post and the New York Herald.  He is credited as having been the very first artist to utilize the lithograph crayon and brush.  This major innovation allowed newspapers to produce highly improved reproductions of cartoons and illustrations within their publications.  Princeton University notes that after he joined Life Magazine in 1898 ” … the volume of Walker’s cartoons increased. One style Walker frequently used to drive home a particular viewpoint was to play upon the stereotypical analogies between good and evil. For example, he used such stories as the hare/tortoise, farmer/snake and little red riding hood to portray the destructive and rippling effects of war. A considerable number of cartoons concentrated on the increasing diversity of the American population. While immigration was on the rise, the melting pot theory became a great area of Walker’s exploration. Finally, the largest topic of satire revolved around domestic political policy. The struggle for power between Republicans (elephant) and Democrats (donkey) often involved such prominent figures as Uncle Sam, Hughes, President Wilson, and Taft.”

Walker also occasionally illustrated books, including “Brokenburne,” which was written by Virginia Frazer Boyle and published in 1897.  For this book he traveled specifically to the American south to prepare his illustrations.  Reviewers at the time noted:  “The illustrations, by William Henry Walker, picture realistically the old-time but neglected home, characters, and surroundings of a before-the- war wealthy plantation. Mr. Walker visited the South, and has seen the scenery he has put into these pictures.”

Beginning in 1924, Walker turned away from black and white illustration work and moved into painting portraits and landscapes.  In addition to depicting scenes in and around his Queens, Long Island neighborhood, he also regularly painted marine themed images of Duxbury, Massachusetts, where he and his family owned a summer home.  Though one would think that Walker would have focused on making a living solely from his artwork, in actuality in his professional life he was employed as a hospital administrator.  He served as president and as a member of the board of trustees of the Flushing Hospital for over twenty years, where he was instrumental in the expansion and modernization of the hospital facilities.

Walker was a member of the Dutch Treat Club and the University Glee Club of New York City, where he was known as “Billy.”  He was also a long time member of many artist related organizations, including the:  American Federation of Arts, Duxbury Art Association, Guild of Free Lance Artists, and the Society of Illustrators.  From the early 20th century through the 1930s he and his family resided in Flushing, Queens County, Long Island, New York (during the 20s and 30s their address in Queens was 336 and later 144-85 Sanford Avenue).

William Henry Walker died in Queens on Tuesday, the 18th of January 1938 at the age of sixty-six following an illness of several months.  A private service was officiated at by the Rev. Hubert S. Wood of St. George’s Protestant Episcopal Church of Flushing and Walker was cremated by the Fresh Pond Crematory in Middle Village, New York.  A few years after his death, in 1942, an exhibition was held of his political cartoons at Swarthmore College Gallery, Swarthmore, Pennsylvania.

The largest collection of his political cartoons, well over 1,000 examples that were published in Life Magazine, reside in the special collections of the Mudd Library at Princeton University in New Jersey.  A further collection of his cartoons and portrait studies are held in the collection of the Archives of American Art at the Smithsonian Institution in Washington, D.C.  According to their records, their holdings include:  “226 portrait sketches and caricatures, dating between 1919 and 1937, of members of the Dutch Treat Club, Walker’s friends, notable artists, musicians, actors, politicians, and writers of the day. Sketches are signed by the sitters.”  In addition to the two major collections mentioned above, Walker’s illustrations and cartoons are also held in the other following public collections:  New York Historical Society, New York, NY.  A large number also reside in private collections across the United States. 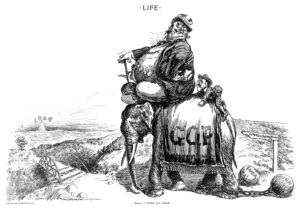 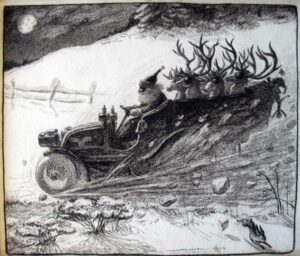