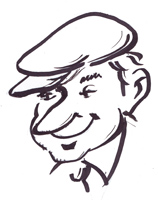 In 1954 graduated from the Moscow Architectural Institute (MArhI).

In 1956 he published the first satirical drawing in the magazine “Crocodile”. Subsequently, he regularly published his cartoons in it, often in co-authorship with K. I. Nevler.

Since 1963 he started working as a theater artist. The first production was the ballet “The Path of Thunder” to the music of Kara Karayev at the Tajik Opera and Ballet Theater named after S. Aini (Dushanbe).

In total, he designed more than 120 performances, including:

In 1965, he was the art director of the New Year’s tree performance in the Kremlin Palace of Congresses “Let the stars shine peacefully”.

Since 1989 — artist of the Moscow Jewish Theater “Shalom”, designed the performances “Enchanted Theater” (1990), “Dance of the little Bronsteins” (1991), “Train for Happiness” (1992). He continued to cooperate with other theaters: in 1990 he designed the performances “Soldier Ivan Chonkin”, “Fatal Eggs” (Michurinsky Drama Theater); in 1995 he participated in the creation of the Purimspiel (Moscow, on the stage of the Central Children’s Theater).

His drawings are included in the collection “106 modern cartoonists of the world” (House of Humor and Satire, Gabrovo, 1980).

Member of the Union of Artists of Russia.

The author of a number of scripts of the satirical newsreel “Wick”, humorous poems and parodies, epigrams.