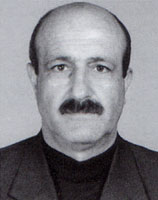 He was bom in Davachi in 1955.
He left the State School of Arts named after A Azimzadeh in 1978.
In 1987 he graduated from The Fine Art Academy named after Repine in Saint- Petersburg.
He has been seriously engaged in cartoon drawing since 1990s.
His paintings were published in many magazines and books.
He works as a teacher-painter from 1993.
He took part in many contests and exhibitions.
He is the member of Azerbaijan Cartoonists’ Union from 2006.
He is the member of Azerbaijan group in FECO (FEderation of Cartoonists Organisations).
His private exhibition was held in 2007.