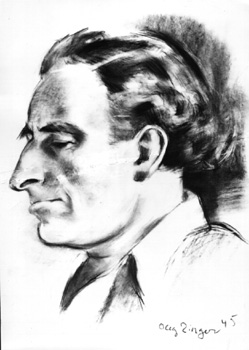 Cartoonist, painter, advertising artist, writer
Oleg Alexandrovich Tsinger was born in 1910 (according to other sources — in 1909) in the family of A. V. Tsinger (1870-1934) and V. N. Pavlova (died after 1934).
Oleg Tsinger’s mother was an actress of the Moscow Art Theater. His father, Alexander Vasilyevich, was a professor of physics, the author of numerous textbooks on physics, as well as a passionate amateur botanist who wrote the book “Entertaining Botany” at the end of his life, which withstood numerous reprints; Oleg’s grandfather, Vasily Yakovlevich Zinger (1836-1907), was also a scientist – professor at Moscow University, a mathematician and a botanist; The founder of the Moscow Tsinger dynasty was Oleg’s great—great-grandfather, Christian Ivanovich Tsinger, a German who moved from Germany to Moscow in the XVIII century and received the title of hereditary nobleman for conscientious service.
During the Civil War, the Zinger family ended up in Kharkov, occupied by the troops of General Denikin; from the summer of 1919 to the summer of 1921, the Zingers lived in the Crimea, in the town of Temis-Su near Yalta; Zinger’s father taught at the school and was its director. In the spring of 1922, the Zingers returned to Moscow.
In the autumn of 1922, Oleg’s father received permission to travel to Germany for treatment (Alexander Vasilyevich suffered from tuberculosis of the spine) — and the Zinger family moved to Berlin.
One of the Moscow acquaintances of the Zingers was the physicist Dmitry Ivanovich Sakharov (1889-1961); after leaving Russia, Alexander Vasilyevich Zinger left him as his representative in publishing. It is known that Oleg Tsinger corresponded with Dmitry Ivanovich’s son, Andrey (1921-1989), a future academician. In his memoirs, Andrei Dmitrievich Sakharov writes about Oleg: “He liked me (as a boy) for some reason, and he sent me his albums with drawings of animals several times; perhaps it was a form of somehow showing gratitude to dad. I really liked these albums, some of them have survived to this day.”
Since childhood, Oleg Tsinger was acquainted with the animal painter Vasily Alekseevich Vatagin (1883/1884-1969), took lessons from him in Moscow, and later in Berlin. In the 1920s Oleg also took lessons from the artist Alexander Arnshtam (1880-1969). Later he studied at the Berlin Art Academy, after which he worked in the advertising department of the company “Central Dikhof”.
Oleg Alexandrovich is the author of the memoirs “Kolyusha — Nikolai Vladimirovich Timofeev—Resovsky”, in which he writes about his life in Berlin, about friendship with the family of the famous geneticist Nikolai Vladimirovich Timofeev-Resovsky (1900-1981), which lasted from 1927 until the departure of Timofeev-Resovsky from Berlin in 1945.
After the war Oleg Tsinger moved to France, lived in Paris, the last years of his life — in Nimes, where he had an office-workshop.
Since 1951, personal exhibitions of Oleg Zinger have been held in France, Germany and the USA.
Oleg Tsinger died on January 9, 1997 (according to other, most likely, erroneous data — in 1998) in Nimes.
Personal life
He was married twice. He lived with his first wife in Germany since before the war, later divorced. He had a child from this marriage.
Second wife — Marianne (Nanny, Nanny, Nani) Muller-Bellingshausen, translator from English by profession, studied at the University at the Faculty of Philology. She was engaged in translations of medical literature from English to German. Oleg Tsinger married her when she was widowed, left with two children aged ten and seven (their own father was a professor of philosophy in Germany). Marianna was more than twenty years younger than Oleg Tsinger. They had no children of their own.
He is also known as the author of several books of memoirs about the life of Russian emigrants. He lived in Germany, then in France.
In some publications in Russian, the spelling of the surname in the French manner is used — Singer.
Reference: Wikipedia, 2010