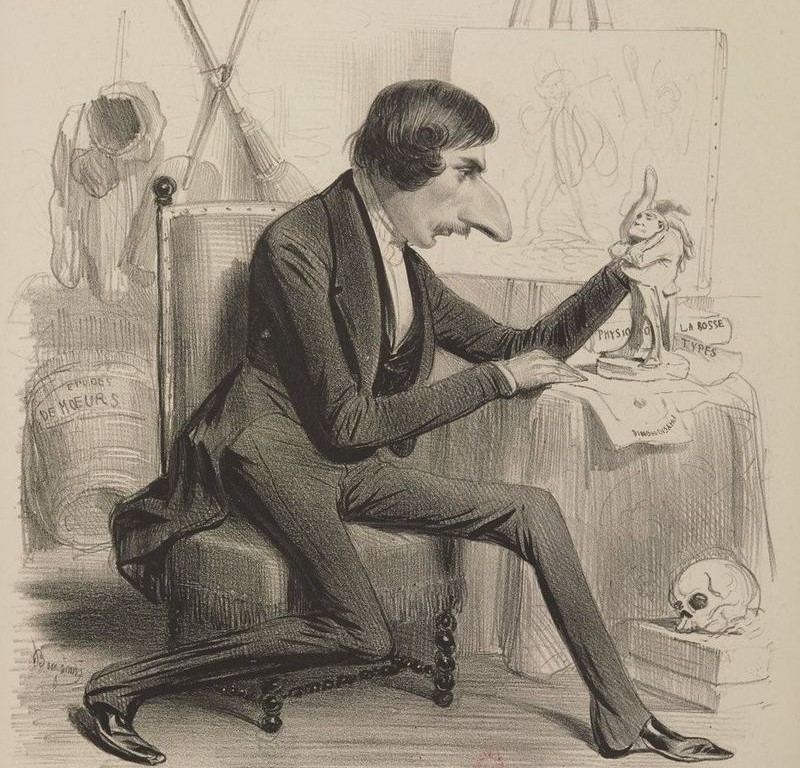 Charles-Joseph Travies de Villers, also known as Travies, is a French artist of Swiss origin, whose works regularly appeared in “La Charivari” and “La Caricature”. His musical “Pantheon” was one of the most famous and widely reproduced musical cartoons of the 19th century. His younger brother was the painter and illustrator Edouard Travies.  Travies was born in Wulflingen (now a district of the Swiss city of Winterthur), although he later became a naturalized French citizen. His father was an engraver of English origin. His mother was from a French family and a descendant of the Marquis de Villers. He studied art in Strasbourg and then with Francois Joseph Heim at the School of Fine Arts in Paris. When he was a young man, a series of financial failures left his parents in poverty, and he became their only support. He began his career with portraits and genre paintings and made his debut at the Paris Salon in 1823. He also started creating drawings for wallpaper and printed fabrics.

By the end of the 1820s, he had become a popular cartoonist, enjoying particular success thanks to his collections Tableau de Paris and Galerie des Épicuriens. He then joined Charles Philipon’s satirical magazines La Caricature and La Charivari, where he was destined to become one of their most prolific cartoonists. Both magazines sharply criticized the July monarchy and its King Louis Philippe, whom they mercilessly caricatured. His most famous creation during this period was the character “Mayeaux” (Mayo) (sometimes spelled “Mahieux” (Maye)), a hunchback who became the personification of all the shortcomings and weaknesses of bourgeois society, which was a principled supporter of Louis Philippe. The character, who first appeared in the pages of La Caricature in 1831, was a source of inspiration for several other satirists, including Daumier, Granville and Honore de Balzac. Using pseudonyms, Balzac wrote two articles about the adventures of Maya for “La Caricature” – “M. Mahieux en société” and “M. Mahieux au bal de l’Opéra».

At this time, Travies also became involved in early socialist movements, and he maintained this interest throughout his life. At first he was attracted by sentimonism, and then by the ideas of Simon Ganno, becoming a follower of the Ganno sect Evadisme, which largely focused on gender equality. In later years, he was increasingly attracted to the utopian socialism of Charles Fourier and Fourier’s disciple Jean Journet. He also had a long correspondence with Flora Tristan and Francois Ponsard, a poet and playwright of the socialist persuasion.

After the assassination attempt on Louis Philippe in July 1835, a law was passed on September 9, 1835, prohibiting political cartoons and articles critical of the king. In light of the subsequent fines and imprisonment imposed on the press for violating this law, Travies, like many of his colleagues, turned his attention to ridiculing French customs and culture. He also provided illustrations for Balzac’s La Comédie humaine and Eugene Sue’s Les Mystères de Paris, and created many images of the Parisian poor and their daily lives.

The last fourteen years of his life were marked by depression and illness. Nevertheless, he exhibited portraits in the Paris Salons of 1848 and 1855, and finally he managed to complete his religious painting “Christ et la Samaritaine”, which was exhibited at the Salon of 1853 and bought by the French government. He died in his Paris apartment on August 13, 1859 at the age of 55. 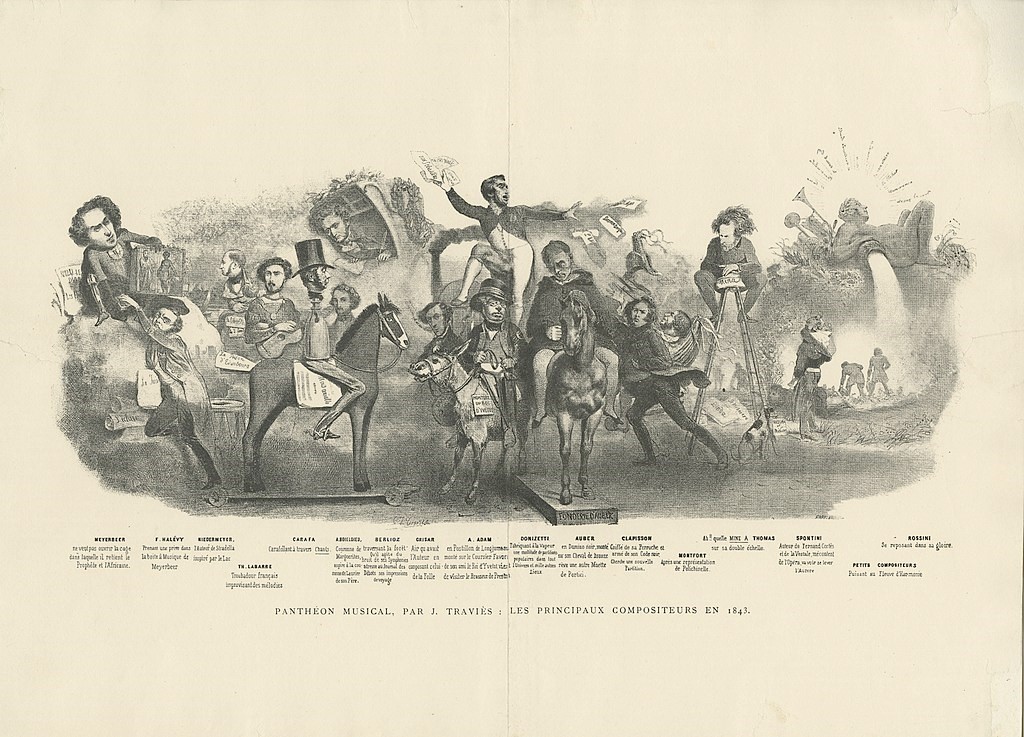 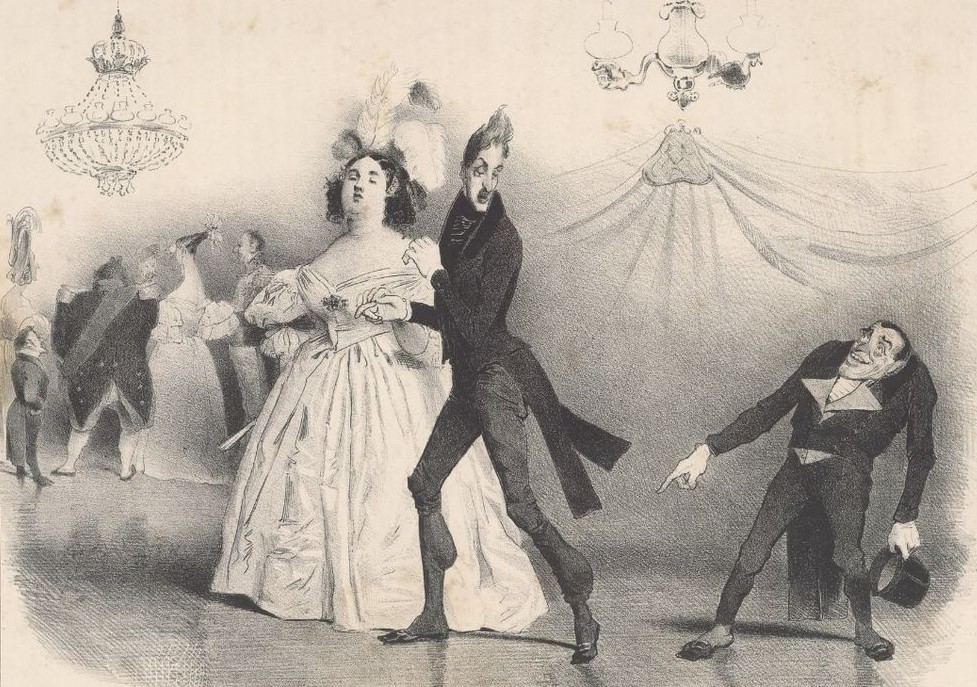 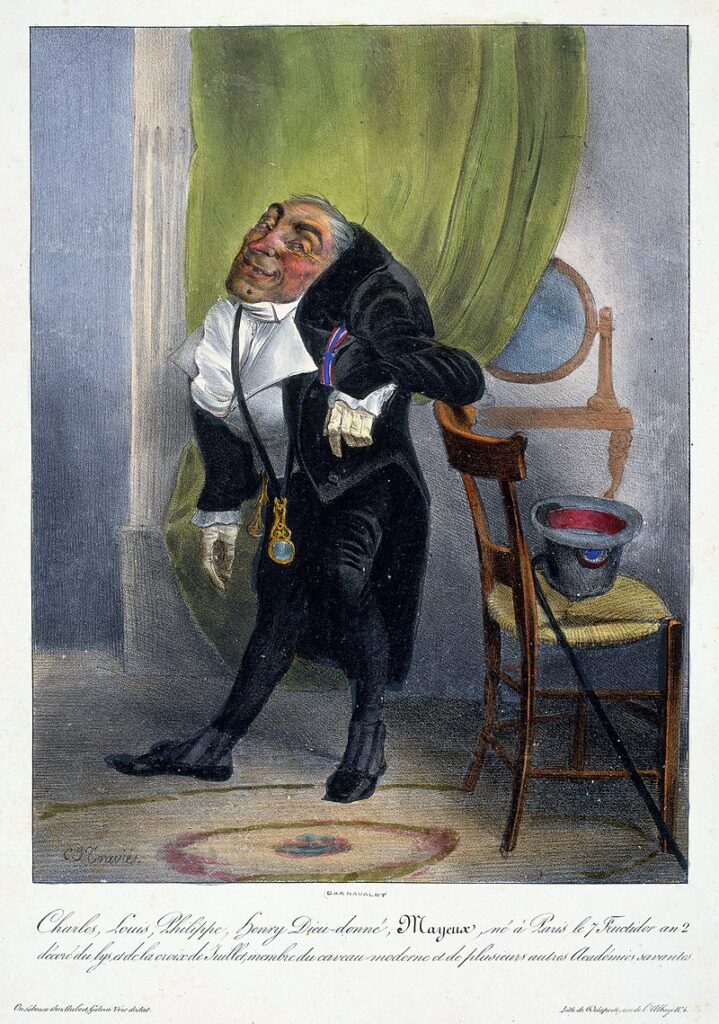