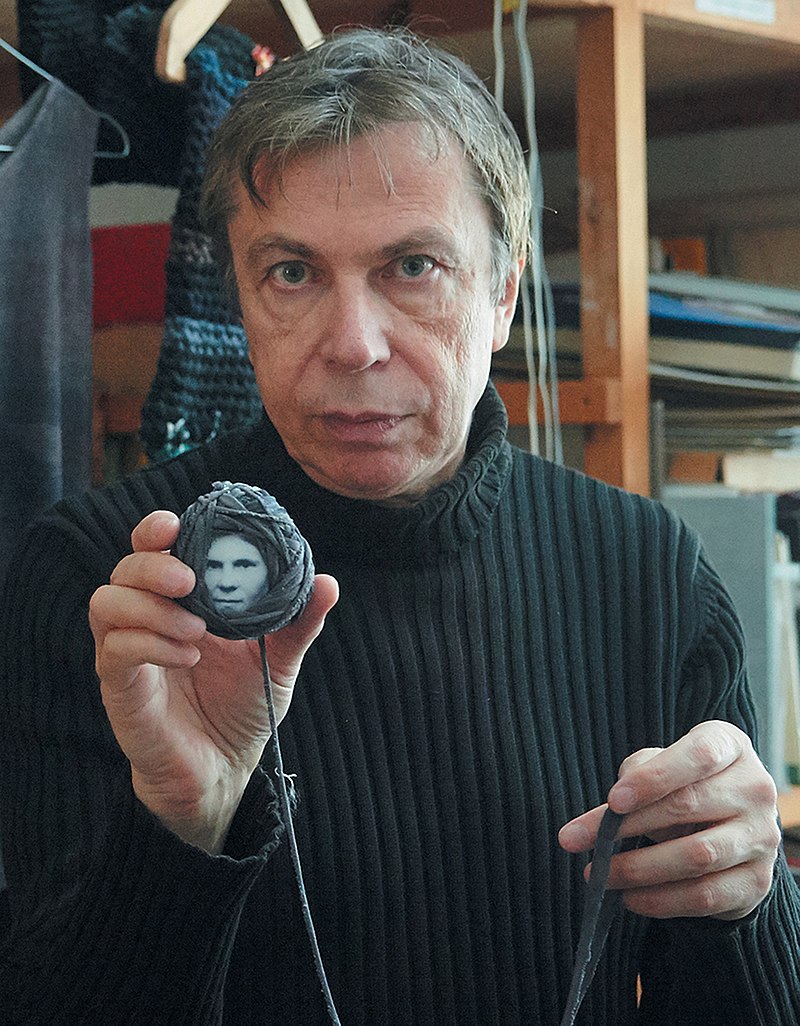 Leonid Alexandrovich Tishkov (born May 4, 1953, Nizhni Sergi, Sverdlovsk Region, USSR) is a Russian artist and writer, a representative of the postconceptual direction in art. Based on conceptual ideas, the artist poses questions of being in his art, focusing on the special ontological status of art. He makes extensive use of the literary component in the visual arts, commenting on installations and objects, accompanying them with texts, albums and books with autobiographical and fictional stories.

He was born in the city of Nizhny Sergi, Sverdlovsk region in the family of teachers Alexander Ivanovich Tishkov and Raisa Alexandrovna Tyagunova. The younger brother of the historian V. Tishkov. Graduated from the First Moscow Medical Institute named after A.M. Sechenov (1979). As a student, he began drawing cartoons, the first publication in the periodical press in 1973, since 1975 a member of the Moscow City Committee of Graphic Artists, participated in exhibitions of cartoonists in the City Committee of Graphics on M. Gruzinskaya since 1978, in the 80s illustrated books in the publishing house “Art” and “Book”, since 1982 a freelance artist. He worked in the squat of the informal association of artists “Furmanny Lane”, then moved to the workshops on Chistye Prudy. In 1990, he organized the ephemeral publishing house “Doublus”, in which he published his books and the books of his comrades, as well as neighbors in the workshop, in small editions. In particular, he published books by K. Zvezdochetov, Nikita Alekseev, Yulia Kisina, Rezo Gabriadze, Dmitry Krymov, poet Mikhail Sukhotin, etc. In the early 90s, he draws comics, works a lot in print graphics – etching and lithography, publishes small editions of books and portfolios in this technique. In 1992, the Getty Center acquired his publications and hand-drawn books in the collection. In 2006, the portfolio “Still Lifes” of 16 color lithographs (1992), as well as other editions of “Doublus” were acquired in the collection of the Museum of Modern Art (New York).

Winner of the Innovation Prize in the field of contemporary art in the nomination “Artist of the Year” (2017). Participant of the International Biennale of Contemporary Art in Singapore (2008), Ichihara Triennial, Japan (2013, 2017, 2020), Setochi Triennial, Japan (2019). He entered the top 20 most influential artists in Russian art in 2017 according to Artgid.

In the mid-1980s, the publishing house “Kniga” published with his illustrations the books “The War with Salamanders” by Karel Chapek, “Twelve Chairs” and “The Golden Calf” by Ilf and Petrov, “The Hunt for the Snark” by Lewis Carroll, “The Writings of Kozma Prutkov”. One of the first illustrated oberiutov — Daniil Kharms, Nikolai Oleynikov and Al. Vvedensky. He also illustrated his own books and his wife, the writer Marina Moskvina.

He also acted as a curator of art projects, in 2002 he prepared a number of exhibitions for the Moscow gallery “Mukha”, was the curator of the exhibition “Avant-garde and Tradition: books of Russian artists of the 20th century”, 1994 in the Russian State Library, as well as the exhibition “The True story of the life, Death and Resurrection of the pharmacist Kraft” in the Tula Historical andThe Architectural Museum in 2014.

The artist’s works are included in the collections of major museums in Russia, Europe and America.