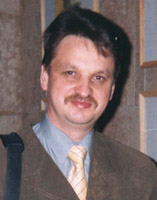 He graduated from the Art School and the Department of Painting in the Art School.
In 1988 he graduated from the People’s University of Culture and Arts.
He worked in folk crafts and an artist-designer.
The first caricature was published in 1986 in the newspaper Vechernyaya Kazan.
He was published in regional mass media: the magazine Chayan, a freelance worker, the publishing house Education, a children’s magazine Umbrella, Youth of Tatarstan, Moskovsky Komsomolets in Tatarstan, Lenin’s Banner, Rybnitsa, Moldavia Baldezhnik, Aphrodite “Izhevsk” Jem Anekdot “, Minsk,” The Star of the Volga Region “,” Honest Word “, etc.
He published more than 2000 caricatures and illustrations.
Participated in international exhibitions of cartoons in Japan, Italy, Yugoslavia.
Laureate of the newspaper “Evening Kazan”.
Manager of social and cultural activities.

The director of mass holidays and theatrical performances.