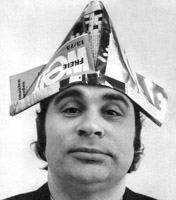 Cartoonist.
Born on June 19, 1938 in Leningrad in the family of a military engineer.
After 1945, the family lives in Moscow.
The future cartoonist graduated from MIIT (Moscow Institute of Engineering and Transport) – and worked for several years in a computer center.
The first cartoon was published in the early 60s in the Baltic States under the name Teslerevicius – a well–known trick – so local admirers of the Muscovite’s talent hid the author’s Russian identity from the Baltic censorship, since the publications of “non-local” artists were not welcome in the Baltic States.
Since 1965, a long-term cooperation with the magazine “Smena” begins, first as an artist, then as an art editor. Thanks to Tesler’s efforts, the famous page of funny and sad drawings appears in the magazine, which had a huge impact on the development of caricature in the country. Caricatures of many “new wave” artists – Tyunin, Tishkov, Nekrasov, Vorobyov and others – are regularly published here.
Then Tesler was the main artist of the Olympics-80, the magazines “Soviet Screen”, “Pioneer”, the newspaper “Izvestia”.
In 1988 he became a member of the Union of Artists of the USSR.
Oleg Tesler’s creative legacy is huge – tens of thousands of cartoons and illustrations, several dozen concept models of magazines and newspapers, publications in the media at home and abroad, numerous international awards.
Tesler had an absolutely unique style of drawing, his own, forever memorable little man, so similar to the author himself (only Oleg did not wear a hat).
But the most important thing is that Tesler was and remains the only master of a rare and difficult genre in caricature – a story in several pictures – “streap–cartoon”. Suffice it to mention that so far there has not appeared in Russia not just a worthy artist in this genre, but in general no one draws “streap”, this is such a difficult occupation.
Oleg did not just masterfully come up with scripts, directed and drew his comics – it was here that he took place as a world-class artist. Tesler was the first to draw and think “differently”, so he was jokingly called “the grandfather of Russian caricature”.
He died on December 7, 1995.
Reference: BACK (The Great Encyclopedia of Caricature), 1995