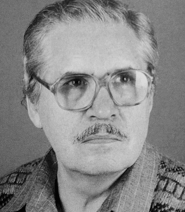 Tatarintsev Viktor Grigoryevich, was born in 1936 in Ukraine.

Member of the Union of Artists of the USSR. Honored Worker of Culture of the Azerbaijan SSR. Member of the National Union of Journalists of Ukraine.

He was born in the Rostov region. Graduated from the Art and Graphic Department of the Azerbaijan State Pedagogical Institute (1960). He worked in the Baku newspaper “HSE”. Illustrated art books, a collection of Azerbaijani and Turkish fairy tales. He is the author of anti-war political cartoons, posters devoted to criticism of NATO and Aggressive US military policy: “Traces of the Pentagon”, “Sat in a puddle”.

Participated in republican and All-Union exhibitions, since 1965. He was awarded the diploma of the international exhibition “Satire in the Struggle for Peace” (1983), Winner of the prize of journalists of Azerbaijan “Golden Pen” (1984).

In the early 90s he moved to Ukraine, came to work in the editorial office of the newspaper Novomoskovskaya Pravda. Viktor Tatarintsev is an artist with a wide range of creativity. Landscapes, still lifes, caricatures, caricatures – everything is subject to the master. He owns the technique of painting, watercolors, works perfectly with a pencil.