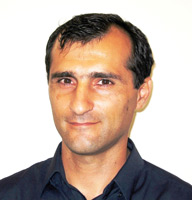 He was born on May 21, 1969 in Tashkent.
Graduated from the Art and Graphic Department of the Tashkent State Pedagogical Institute in 1995. (Diploma with honors on the topic: “Graphic works in the form of a cartoon”).
The first caricature was published in 1989 in the newspaper “Evening Tashkent”. Printed in the newspapers Komsomolskaya Pravda, Pravda Vostoka, Vecherniy Tashkent, and the magazines Yulduz, Mushtum.
Held two personal exhibitions in Tashkent (1992, 1996).
Since 2005 participant of international and domestic cartoon contests.
Laureate of two international cartoon contests.
The largest prizes: China 2005 and 2006.
Worker in the sphere of security.