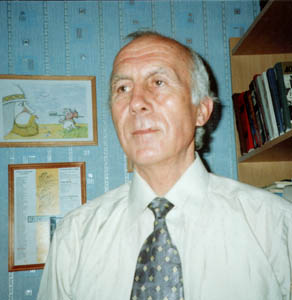 He was born on May 7, 1949 in the Kuban village of Plastunovskaya.
He graduated from the Rostov Pedagogical Institute, the Faculty of Philology, majoring in teaching Russian language and literature in 1970.
For three years he worked as a teacher in a rural school, then retrained for journalists. He was a literary worker of the city newspaper, an editor of the factory multiparty.
The first caricature was published in the institute’s large-circulation newspaper For Communist Education. Then there was cooperation with the regional press, magazines “Ural tracker”, “Soviet Union”.
Now in the creative asset of the artist – publications in the magazines “Chayan”, “Crocodile”, “Vovochka”, “Around laughter”, the newspapers “Literary Gazette”, “My Merry Family”, “Novye Izvestia”, “Express Newspaper”, “Secret power”.
Member of international and domestic competitions and exhibitions in Russia, Germany, Poland, China, Azerbaijan, Turkey, Italy, Serbia, Belgium.
Laureate of the Golden Calf Prize.
He was awarded the medal of the jubilee Moscow exhibition of cartoons “With a sense of humor in life.”
Member of the Club of 12 Chairs (Moscow)
Member of the Russian Union of Journalists
Member of the Artists Union of Russia