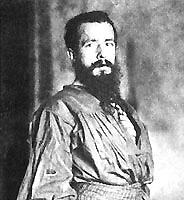 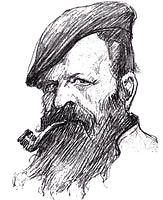 He was born in the family of a major St. Petersburg official, nobleman Egor Vasilyevich Shcherbov. He was baptized in the Annunciation Church on Vasilievsky Island, not far from the family’s place of residence (house No. 39 on the 12th line). Since the family was wealthy, the young Shcherbov could do what he wanted. He studied at the Wiedemann Private Gymnasium, after which, in 1885, he entered the Academy of Fine Arts. Shcherbov studied at the Academy for only two years. However, the connection with the students of the academy, who were on the notice of the police, did not allow him to get permission and go abroad to continue his education.

After leaving the academy, he organized a “Roaring Camp” circle in his apartment — something like a home drawing class. There he began to draw his first cartoons, first on his friends-artists.

He traveled a lot around the world — he was in the Caucasus, Persia, Turkey, China, Japan, Africa. In 1888, together with a friend, artist A. A. Chikin, he made an adventure—filled trip to Africa, where the travelers were the first Russians to camp near the largest mountain in Africa – Kilimanjaro. During the journey, Shcherbov collected an ethnographic collection, which he handed over to the Russian Geographical Society, for which he was awarded a small silver medal. After, from other trips, the artist also brought photographs and ethnographic material, which he donated to scientists. Shcherbov made his last long trip to Japan.

He first published his work in 1896 in the magazine “Jester” under the pseudonym “Old judge” (old judge), from the same year he became a permanent employee of the magazine. After that, he is often published in humorous magazines, including “Fool”, “Lukomorye”, “Spectator”, participates in exhibitions in St. Petersburg, Moscow, and other cities. The main theme of his cartoons were people whose lives he knew well — artists, art critics, patrons. His works are beginning to be in demand — they are bought by both private collectors and government agencies.

The most famous caricature of the artist is the “Bazaar of the XX century”, which depicts more than 100 portraits of famous sculptors, artists, collectors, publishers and critics of St. Petersburg. All of them are depicted at the bazaar selling and showing their goods, which figuratively conveys the state of the artistic life of the city at the beginning of the XX century. The painting was purchased for the Tretyakov Gallery on the advice of the famous artist V. A. Serov.

Since 1900, the Shcherbov family moved to Gatchina, where the artist remains until the end of his days. At first, the family rented houses and apartments, moving from place to place, but in 1911 the Shcherbovs built their own house on Olginskaya Street (now house No. 4 on Chekhov Street), where the family moved to permanent residence. The house of original architecture becomes one of the attractions of the city, among the citizens it is known as the house of P. E. Shcherbov. Frequent guests at the cartoonist’s house were M. Gorky, A. I. Kuprin, F. I. Chaliapin.

In 1919, Shcherbov began working at the Gatchina Palace as the keeper of the Arsenal Gallery, the Chinese Gallery and the interiors of the Arsenal Square. His work in the palace lasted 10 years.

The artist died on January 7, 1938 and was buried at the Gatchina Cemetery, near the southern wall of the Church of All Saints.

During the artist’s lifetime, not a single one of his solo exhibitions was held, although there were attempts to hold them in 1920 and in 1926. Only after the artist’s death, on the 120th anniversary of his birth, in 1986, the first solo exhibition was held.

In 1992, the historical and memorial museum-estate of P. E. Shcherbov was organized in the Gatchina House of Artists.