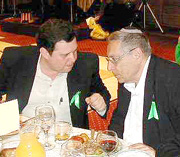 He was born in the family of a military doctor. In 1976 he graduated from the Medical Institute in Rostov-on-Don. Since 1977 he worked as an otolaryngologist. In the first year of the Institute, he began to design the Komsomol Searchlight stand. But he did not last there for a year, he was fired for the release of “Weekdays of the 53rd department”. The fact is that there were 52 departments at the institute. The Institute town was surrounded on all sides by drinking establishments. The most popular place among students and teachers was the Theater pub. The artist depicted how people gather there during lectures. For recognition, I was fired from the “Spotlight”.

In Israel, the fascination with caricature has developed into a professional activity.  His caricature of the Minister of Health Olmert gained popularity for a protest demonstration against the additional accreditation of emigrant doctors.

To cooperate with the humorous magazine “Beseder”, then with the large Russian-language newspaper “Vremya” and the Hebrew-language magazine “Nowhere”. And in January 1992, The Jerusalem Post began to be published.

In 1994, for one of his works published in the Russian-language newspaper Vesti, he was detained by the police on charges of anti-Semitism. The hero of the cartoon was an orthodox Jew. A big scandal broke out, which became an occasion for discussion on television on the program “On Politics”.

In 1997, an exhibition of cartoons was organized in the Knesset. In the same year I received a prize at the international cartoon exhibition.

In September 1998 Oleg moved with his family to Toronto, Canada. Where he continued to collaborate with The Jerusalem Post.