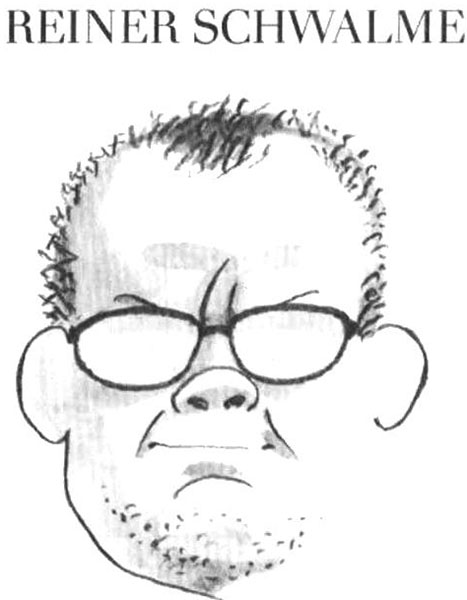 He was born on June 19, 1937. The only child from a Wilroy seamstress and spent an early childhood in Klichkov. After graduation, he went to Berlin, where he graduated (after a short training at the Academy of Fine Arts Berlin-Weissensee) and received a diploma as a certified designer in the College of Industrial Arts. Then he worked as a graphic artist in the GDR in the trade union newspaper Tribune. In 1966 he worked as a freelance graphic artist of newspapers and books in various publishing houses. The increase in interest in laborious and socially critical cartoons led him in 1985 to the satirical magazine GDR Ulenshpigel. In the last years of the GDR’s existence, he became one of the most famous political cartoonist of the country. Since 1992, he has been drawing cartoons for the Saxon newspaper. By the 70th anniversary of his collection of cartoons with the best works – “The best cartoons in 30 years.” Rainer Schwalme came to the caricature rather late, although drawing was his passion from early childhood. He passed the entrance examinations to the College of Fine and Applied Arts in Berlin-Weissensee, where from a year later he was expelled for freethinking. Then he graduated from the school of advertising and design in Berlin, where he received a diploma in design. For seven years he worked in the trade union newspaper “Tribune”. During this time, he drew vignettes, illustrations and fonts. He was also published in Berliner Verlag, Neue Berliner Illustrierte, in the case of FF, for the young publishing world, was published in children’s and youth editions of Bummi, Technikus. Since 1985 he collaborated with the satirical magazine “Ulenshpigel”.