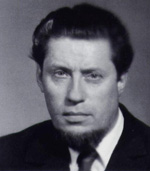 He was born on September 3, 1926 in Kuibyshev.
But his entire work biography is connected with Ufa.
In 1955 he graduated from the art department of the Ufa Art College.
Since 1956 and up to retirement he worked in the republican satirical magazine “Hankek” (“Forks”).
He was known not only in the republic, as an artist-caricaturist, he was well known and beyond.
His bright, topical cartoons were published in central publications, especially in the all-Union satirical magazine Krokodil.
Alfred Stabel was a participant and winner of many republican, all-Union and international exhibitions and competitions.
He made a significant contribution to the development of the genre of satire and humor in Bashkortostan.
Last years was published in the newspaper Soviet Russia.
For his great achievements in art he was given the title of “Honored Artist of the BASSR”, “People’s Artist of the Republic of Bashkortostan”.