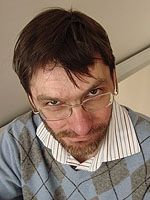 He was born on December 25, 1971, in the city of Vitebsk, the USSR (the Republic of Belarus).
In 1995 he graduated from the Mathematics Department of the Vitebsk State Pedagogical Institute, majoring in “Teacher of Mathematics and Physics”.

In the period from 1995 to 2004 he worked as a teacher in Vitebsk universities (veterinary academy and technological university), studied at the graduate school of Polotsk State University.
In December 2004 he defended his thesis, becoming a candidate of physical and mathematical sciences.
Since 2005 he lives and works in Moscow.

The first caricature was published in 1995, in the newspaper “Vitebsk Courier”.
In the same year he became a full-time (in combination) artist of the regional newspaper Narodnoye Slovo, where, among other things, he conducted a humorous page.
At the same time, he began to publish in republican humorous and entertaining publications (Vozhyk, Piknik, 15 days), later the drawings appeared on the pages of Russian newspapers and magazines (“Around Laughter”, “The Wheel of Laughter”, “Chayan” and etc.).
I managed to publish in Crocodile.

Participated in more than 100 international contests and exhibitions of cartoons in Russia, Germany, Spain, Portugal, Italy, Serbia, Korea, India and other countries.
In 2004 he published a collection of cartoons “Ridiculous.”

At this stage, the main field of professional activity is business education.
Caricature as a means of existence is not considered, therefore the number of publications in the press at the moment is reduced to a minimum.
For many years the author’s song was another sphere of application of creative forces. Solo and in the trio became a laureate of various competitions and festivals in Belarus, Russia and Ukraine.
From 1995 to 2004 he was one of the organizers of the Festival of the author’s song “Vitebsk leaf fall”.
He co-operated with the directorate of the International Festival of Arts “Slavianski Bazaar”, was the organizer and curator of the author’s song program within the framework of the festival.
In 2000 he organized the theater-studio of the author’s song.
At the presentation of the collection of cartoons “Funny” mixed two genres (caricature and author’s song) into one stage action.

Member of the international cartoon club Cartunion.
In public unions does not consist, in political parties it is not involved.