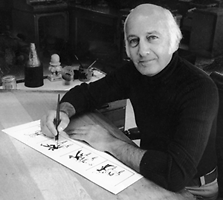 American cartoonist born in Hackensack, New Jersey, on February 10, 1925. Like many other cartoonists, Vahan Shirvanian did not study art formally, instead taking his bachelor’s degree in English. Yet his development as an artist, if not positively accelerated by a parallel study of literature and language, certainly proceeded apace; in 1946. At the age of 21, he sold his first cartoon to the highly presti­gious Saturday Evening Post, at that time the preserve of some of the best and most widely known cartoonists in the United States. Recognition followed this initial suc­cess rapidly, and today the list of periodicals to which Shirvanian contributes is a roll-call of all the most impor­tant showcases. His work appears (or has appeared) regu­larly in the New Yorker, Playboy, Penthouse, Saturday Review, Look. Life, Time and the New York Times, to mention only a few. He has won the respect and acclaim of his fellows and was named Best Magazine Cartoonist of 1962 by the National Cartoonists Society, of which he is a leading member.

Working mostly in simple line and washes, Shirva­nian adapts his art to a broad range of humor – from an intellectual’s fascination with the cybernetic society (e.g., a complex machine with buttons for on, off and maybe or a television that informs prospective viewers that it will present nothing worth seeing that evening) to the more ribald visions that characterize his contribu­tions to Playboy and Oui (like the tarted-up young thing who informs a large dog with bedroom eyes, “Let’s get one thing straight, Bruno. I got you for protection, not for companionship”). While the overall quality of Shirva- nian’s work is uneven, he is undeniably (and frequently) capable of a whimsical lyricism that ranks with that of the very finest practitioners. Take, for example, the New Yorker rendering of a man stunding under a starry sky, hands thrust deeply into his pockets, staring into the distance with baffled abandonment while his wife, in nightdress, calls from the lighted doorway of the house behind him, “Come to bed, Ridgely. If your boomerang were going to return, it would have come back hours ago.” To those of us who have waited, similarly bereft, for the return of our vanished “boomerangs.” such a drawing literally speaks volumes.

These days Shirvanian devotes himself to working for Playboy and Penthouse, which he likens to “coming home after a hard day’s work and playing tennis—great relaxation” after years of the apparently more restrictive regimen of magazines like the New Yorker. In addition he has branched out into comic strip art with the com­mencement of a syndicated strip for King Features in the spring of 1979.