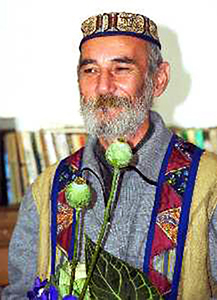 Rashid Sherif was born September 29, 1953 in Baku and educated in Azerbaijan State College of Fine Arts after Azimzadeh from 1970 to 1976. Being eventually a theatre artist he designed the staging of many theatre and TV shows. From 1989 he has been the design director of YUG state theatre. Rashid participated in a number of international theater festivals in Istanbul, Tehran, Ashgabat, Tbilisi etc.
Diversified artistic activity of Rashid includes also professional caricature which he applied to in 1992 when he began his co-operation with Azadliq independent newspaper. Later he contributed also in the production of such independent periodicals as Press-fakt, Veten Ocagi, Panorama, Yeni Musavat and Caspian Crossroads journal, the latter issued in Washington DC. For now he has got over 1900 cartoons.
In 1996, 1997, 1998 and 1999 Rashid was awarded Kluch Media (Media Key) prize of Independent Union of Azerbaijan Journalists as the best cartoonist. Artistic activity of Rashid covers also graphics, design, placard and drybrush painting on paper and silk.
Rashid’s first personal exhibition took place in 1995 in Baku Arts Center. The next one Painting, Theatre, Caricature was in Nizami Museum in 1997.