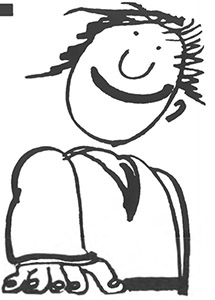 He was born in 1930.
He received his art education in Budapest, in the School of Industrial Drawing, then in the School of Graphics.
The first cartoons were published in the journal Radio and Television.
After serving in the army, he entered a regular artist and editor in this magazine, where he worked for ten years.

Later he moved to the editorial office of the magazine “Ludash Mati”, in which his drawings were sometimes published. Here he worked to this day.

In addition to cartoons, he is also engaged in book graphics, illustrated, mainly, books for children.

From time to time I worked with pleasure in animation.
He was an artist of a large 26-episode film “Pom-Pom”, co-author of a number of other cartoons – “Train”, “Tales of Lafontent”, “Motopertuum”, for which he received the Golden Palm award at the festival in Cannes.
At the competition in Budapest, a series of his promotional films was awarded a Special Award of Critics.

Quotation from the book “We are visiting artists of the Hungarian satirical magazine” Ludash Math “series” Masters of the cartoons of socialist countries. ”