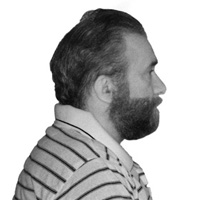 Mikhail Grigoryevich Light was born in 1959 in Dnepropetrovsk.

In 1977 he graduated with honors from Dnepropetrovsk Children’s Art School and with a gold medal in secondary school No. 19.
He graduated from the Dnepropetrovsk Institute of Civil Engineering in 1982, with a red diploma.
He worked as an architect in Donetsk “Promstroiproekt”.

In 1983, he served for 3 months in the Soviet army as a reserve officer.
In 1984 he worked as an architect in Dnepropetrovsk “Grazhdanproekt”, at the Karl Liebnecht plant in the department of designing small architectural forms.
Before leaving for the United States he worked in the department of perspective design of the production association “October”.

In 1987 he published the first caricature in the newspaper Izvestia.
In the same year he became an active member of the Dnepropetrovsk club of cartoonists “Hopak”, began to take part in the All-Union and International contests of cartoons (Japan, Belgium, Canada).
Many of his works were awarded prizes.
In 1990, Mikhail and his family immigrated to Israel.
He lived in Herzliya, a small resort town near Tel Aviv. He worked as the head of a multimedia group in the Israeli company “Onyx”.
He continued to be engaged in a caricature, published in the newspaper “MAARIV”, the magazine “GLOBE” and also in the Russian-language newspapers of Israel.

In 1998, Mikhail and his family moved to America.
Settled in the village of Westborough near Boston and began working as a graphic designer at the American Corporation EMC.