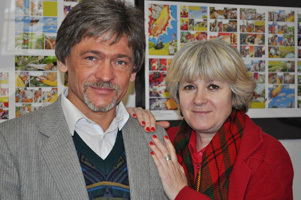 He graduated from M.B.Hrekov State Art School in Odessa in 1978 / Painting Department / and Kharkiv Art and Industry Institute in 1983 by specialty of graphic artist / graphics faculty/.

Winner of international competitions of satire and humor.

After graduating from Kharkiv Art and Industry Institute in 1983 with the graduate work “Series of Political Anti-War Cartoons”, Leonid Storozhuk has been working in the genre of cartoons, satirical graphics, and political cartoons for more than 30 years. He took part in more than 400 international and national competitive exhibitions of cartoon graphics. He won more than 50 awards and diplomas of competitions related to satirical cartoons and graphics. His pictures were published in periodical publications of Kharkiv and Kyiv: “Ukraina”, “Peretz”, “Krokodil”, “Krasnoye Znamya”, “Vechirniy Kharkiv” and others. He worked as a freelance artist in the “Krokodil” magazine, Moscow, (Russia)

Leonid Storozhuk had been working in the Children and Youth Creativity Palace for 27 years, he organized and directed “TELEKOMIKS”, a television animation studio, where young film and video artists were trained. The studio received numerous awards and Grand Prizes of various festivals of children’s creativity over the period of its existence. The TV program for Kharkiv TV channels was created. The “TELEKOMIKS” studio was invited many times to “Artek”, an international children’s camp, where programs for international film festivals of ARTEK were created.