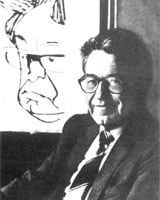 Cartoonist
He graduated from the Moscow Polygraphic Institute.
He is an art editor.
He worked as a replacement master in the gravure press shop in the printing house and in Riga.
And then the head of the department of technical control.
Without a break from production, he was engaged in caricature creativity, first in the wall press, then in the republican youth newspaper. He worked as a deputy art editor in the magazine Krokodil, and later a long time as an art editor.
At the same time he published a lot in the journal, as a cartoonist and writer of humorists.