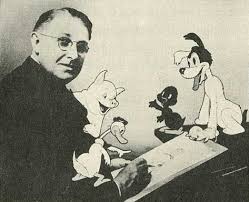 Spargo, Donald Nicholas, British animator-writer-director born in Birmingham, England, on March 16, 1921. Nicholas Spargo was educated at Handsworth Grammar School and went on to study architecture at the Birmingham Art School,

being articled to a local architect In 1938. As a member of the Territorial Army, he was called up in 1939 and served as a radar instructor throughout the war while freelancing joke cartoons and story illustrations for the monthly magazine London Life. Always intrigued by the animated cartoon (he had attempted to make a home movie out of toilet paper at the age of six), he contacted Disney director David Hand when Hand came to England to set up the Gaumont British Animation studio at Cookham in 1946. By studying the book The Art of Walt Disney, Spargo learned how to construct a storyboard and sent Hand a pictorial scenario based on a favorite Welsh legend. The result was immediate: Hand procured Spargo’s early release from the army and assigned him to the story department under Ralph Wright. An “economy” series was devised by using more camera movement than is involved in animation. It was called Musical Paintbox, and Spargo worked on it. One of the first entries, Wales, used his Welsh legend storyboard: “The Devil’s Bridge” (1949).

After Ralph Wright’s departure, Spargo became story supervisor at GBA until the studio closed. One of his unproduced storyboards was turned into a comic strip, Legend of the Lincoln Imp, which ran in the weekly children’s paper Eagle (1951). This led to a return to press cartooning, and Spargo ran a weekly strip called Spargo! In the Sunday Empire News, drew a weekly topical cartoon for the Sunday Graphic and scripted strips for the children’s comics Comet and Sun. Then came a call from Halas and Batchelor and a return to animation via the story adaptation of George Orwell’s Animal Farm (1954).

Around this time England was preparing for the birth of commercial television, and the J. Walter Thompson agency opened a television department. Spargo’s storyboard for a Persil commercial was not only accepted, but he was asked to make it. With his wife, Mary, who had worked with the Royal Navy film unit. Spargo set up a studio in his home village of Henley-on-Thames, and soon 25 people were working for Nicholas Cartoon Films. Among his many television commercials was the first British cartoon to win an award at Cannes, Cheese Baby. In 1962 a new style of cartoon was created in The Arnold Doodle Show, a weekly 15-minute “advertising magazine”.  By keeping his animated cartooning a “cottage industry”, and thanks to continuing sponsorship from the Central Office of Information. Spargo has weathered several severe economic depressions. Recent work includes Duel (for Shell. 1962), Genius Man (1967). The Joe and Petunia series (1971), Disgusted Binchester (for the Race Relations Board, 1974), Supernatural Gas (1975) and And So Do You (for the Nigerian government, 1977).