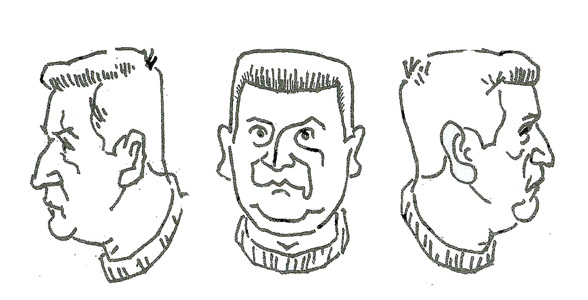 He was born on July 15, 1954 in the town of Gavrilov Yam, Yaroslavl region.
He graduated from the Children’s Art School at the Yaroslavl Art College in 1970.
Served in the Guards Taman Division in the reconnaissance battalion of the tank regiment (1974-1976).
He graduated from the Yaroslavl Art College in 1977, specializing in graphic design and designer.
He graduated from the Yaroslavl State Agricultural Academy in 1999, majoring in economics and management in the agro-industrial complex.
Philosophy of the funny in the fine arts studied in the studio of the artist Vitaly Peskov (1986 – 2002).
Basics of composition in the cartoon studied in the studio of the artist Vladimir Mochalov (late 80’s – early 90’s.).
Published in the central mass media of the USSR (Trud, Pravda, Krokodil, Sovetskaya Rossiya, etc. …).
Yevgeny Snezhko is a master keeper of folk art craft “Yaroslavl painting”.
In 2002, a collection of cartoons “Yaroslavl humor.”
In 2011, a solo exhibition “Yaroslavl lubok and Yaroslavl painting of the late 20th – early 21st century” took place at the State Russian House of Folk Art (Moscow).
The exhibition was exhibited in Yaroslavl, Myshkin, Pereslavl and other cities.