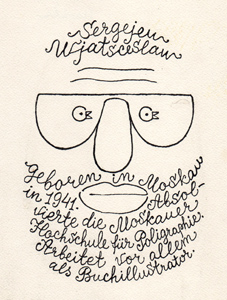 He graduated from the Moscow Polygraphic Institute in 1969. He worked in children’s publishing houses: “Little Boy”, “Children’s Literature” and others, as an illustrator. For many years he worked in the magazine “Murzilka”.

As a cartoonist began to print in 1999. Participated in the International Cartoon Contests. Laureate of several awards.

Currently he works in the field of cartoons and as an illustrator of children’s literature.