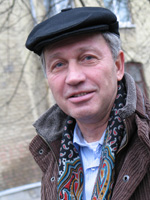 Born February 14, 1945 in Leningrad in the family of the artist – cartoonist Lev Samoilov.

He lived with his parents in Talin, Riga and, finally, since 1959 – in Moscow.
In 1970 he graduated from the Moscow Textile Institute.

He began to publish in “Trud” in 1969.
After serving in the army, he worked as a designer, drawing cartoons in parallel and printing them in various media, including in Crocodile, before closing it.

A participant in contests of cartoons domestic and international.
He was a laureate of several of them.