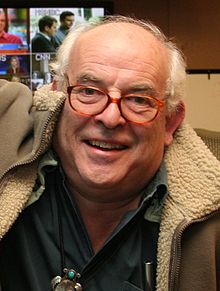 Steadman was born in Wallasey, Cheshire, to an English father, Lionel Raphael Steadman, and a Welsh mother, Gwendolyn; the family moved to Wales at the end of World War II. Stedman attended grammar school at Abergel in North Wales but hated the sadistic new principal and left at the age of 16. His father was from the lower middle class and his mother worked as a sales clerk at TJ Hughes in Liverpool. Stedman got his first job at age 16 as a radar operator at the De Havilland plant. An aircraft factory in the frontier town of Broughton near Chester, but remained there for only nine months, finding factory life monotonous and boring; however, he learned technical drawing there, thus planting the seeds for his future career. Later, while working at Woolworths, he was sweeping the outside when he ran into his old director, who succinctly stated that Steadman had completely screwed up his life, and then began to make his way right through the freshly swept pile, scattering it in all directions. Stedman returned to England after his national service in 1954 and found work in London as a cartoonist. Wanting to speed up his progress, he enrolled in 1959 at East Ham Technical College and the London College of Printing in the 1960s, doing freelance work for Punch, Private Eye, Daily Telegraph, The New York Times and Rolling Stone during this time.

Stedman collaborated for a long time with the American journalist Hunter S. Thompson, drawing illustrations and cartoons for several of his articles and books. He accompanied Thompson to the Kentucky Derby for an article for Scanlan’s magazine, to the Honolulu Marathon for Running magazine, and illustrated “Fear and Loathing in Las Vegas” and “Fear and Loathing on the Trail of the ’72 Campaign”.

Steadman expressed his regret at selling the original Fear and Loathing in Las Vegas artwork on the advice of his agent to Rolling Stone founder Ian Wenner for $75, a fraction of their later value. As a result of this deal, Steadman basically refused to sell any of his original artwork, and is quoted as saying, “If anyone owns Steadman’s original, it’s stolen.” Although original works are kept outside his archive, they are extremely rare. The artist retained much of his original work.

In addition to writing and illustrating his own and Thompson’s books, Steadman has worked with writers such as Ted Hughes, Adrian Mitchell, and Brian Patten, and illustrated editions of Alice in Wonderland, Treasure Island, Animal Farm, English translation Flann O’Brien books. The Gaelic classic “Poor Mouth” and the more recent “Fahrenheit 451”.

Steadman has drawn album covers for many musical artists, including The Who, Exodus, Frank Zappa and Ambrosia, and the main banner for the gonzo journalism website GonzoToday.com

Stedman is well known among the British public for his catalog illustrations for the unlicensed network Oddbins.

In 1985 Steadman designed a set of four British postage stamps to commemorate the appearance of Halley’s Comet that year.

Stedman illustrated Will Self’s column in The Independent newspaper.

In 2014, Steadman created the cover art for the Breaking Bad limited edition DVD series in steelbook style. These works were the subject of an exhibition at the 71st Gallery in Hackney, London in February 2015.

In 2016, Steadman did the cover of Anthony Bourdain’s Appetites: A Cookbook.

In 2020, Steadman created the cover art for the documentary Freak Power: The Ballot or the Bomb, which follows journalist Hunter S. Thompson and his 1970 campaign for sheriff of Pitkin County, Colorado.

Stedman designed the Flying Dog beer label and designed the V logo, which has been used on Flying Dog packaging since 1995. The logo includes Steadman’s original motto, “Good beer without crap.” Because of this, and Steadman’s controversial label design for the craft brewery’s Road Dog ale and Doggie Style ale, an obscenity complaint was filed against Flying Dog. The Colorado Liquor Board then pulled Flying Dog beer from store shelves. Flying Dog and the American Civil Liberties Union sued the state of Colorado while the displayed motto was changed to “Good Beer Uncensored”. In 2001, the Colorado Supreme Court ruled in favor of Flying Dog under the First Amendment to the United States Constitution (free speech provisions).

In 2009, the Michigan Alcohol Control Commission banned Flying Dog’s “Raging Bitch Belgian-Style IPA” in part because of the name and in part because of Steadman’s label. In 2015, the Federal Court of Appeals for the 6th Circuit overturned the First Amendment ban and recommended civil damages to the State of Michigan.

In an article that was removed from its website, Flying Dog claimed that its Cardinal “Spiced” Zin’ wine was banned in Ohio due to Steadman’s “alarming” interpretation of the Catholic cardinal on its label.

In 2018, Flying Dog received a complaint in the UK about the packaging of their low-alcohol Easy IPA. The complaint was partly about Steadman’s label, which featured a drunken cartoon character. The Portman Group, an independent body evaluating alcohol marketing in the UK, has taken up the allegation of a complaint that the artwork “may be seen as encouraging drinking”, especially among minors, and issued a recommendation.

In 1980 Steadman wrote the 57-second song “Sweetest Love (Lament after a Broken Sashcord on a Theme by John Donne)” for an album he illustrated, Miniatures: A Sequence of Fifty-One Tiny Masterpieces (edited by Morgan Fisher), on Pipe Records. Stedman sang the song to the accompaniment of Fischer’s harmonium.

In 1999 Steadman wrote lyrics for Richard Harvey’s choir album Plague and the Moonflower for Altus Records.

Also in 1999, Steadman released an anthology album of his “favorite music” on EMI Records called I Like It. Two pieces of his own music are included: “Weird & Twisted Nights” (listed as a collaboration with Hunter S. Thompson and someone named McDean) and “Sweetest Love I Do Not Go” (the same 57-second piece, which he released in 1980). The album comes with a “songbook” with Steadman’s lyrics.

In 2011, Steadman began publishing prose and poetry in Kotori Magazine.

In 2015 Steadman released the 7″ vinyl single “The Man Who Woke Up in the Dark” b/w “Striped Paint” on Philthy Phonograph Records.

In 2020 Chronicle Chroma published a comprehensive book on Steadman’s work and career, A Life in Ink by Ralph Steadman.

Awards he has received for his work include the Francis Williams Book Illustration Award for “Alice in Wonderland”, the American Society of Illustrators’ Certificate of Appreciation, the W. H. Smith Award for “I’m Leonardo” illustration, the Dutch Silver Brush Award for ” Inspector Mouse”, the Italian Critica in Erba Award for This Is My Dad, the BBC Design Award for Postage Stamps, the Black Humor Award in France and several awards from the Association of Designers and Art Directors. In 1979, the American Institute of Graphic Arts named him Illustrator of the Year.

The premier documentary on Steadman’s career, “Without a Good Reason,” directed by Charlie Paul, was screened at the 2013 Toronto International Film Festival on the Mavericks Program. The film, which was reportedly 15 years in the making, was shown in New York and Los Angeles in December 2013 before being released in the US in the spring of 2014. The film competed for the Grierson Award for Best Documentary at the 2012 BFI London Film Festival. 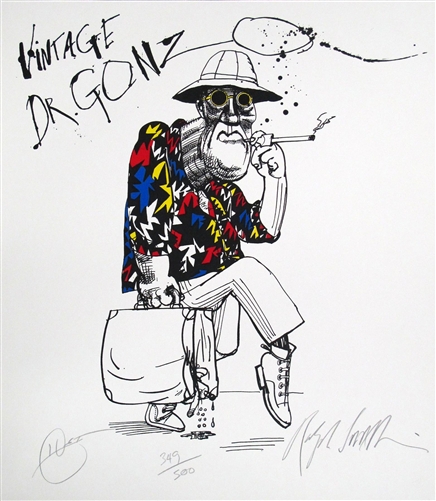 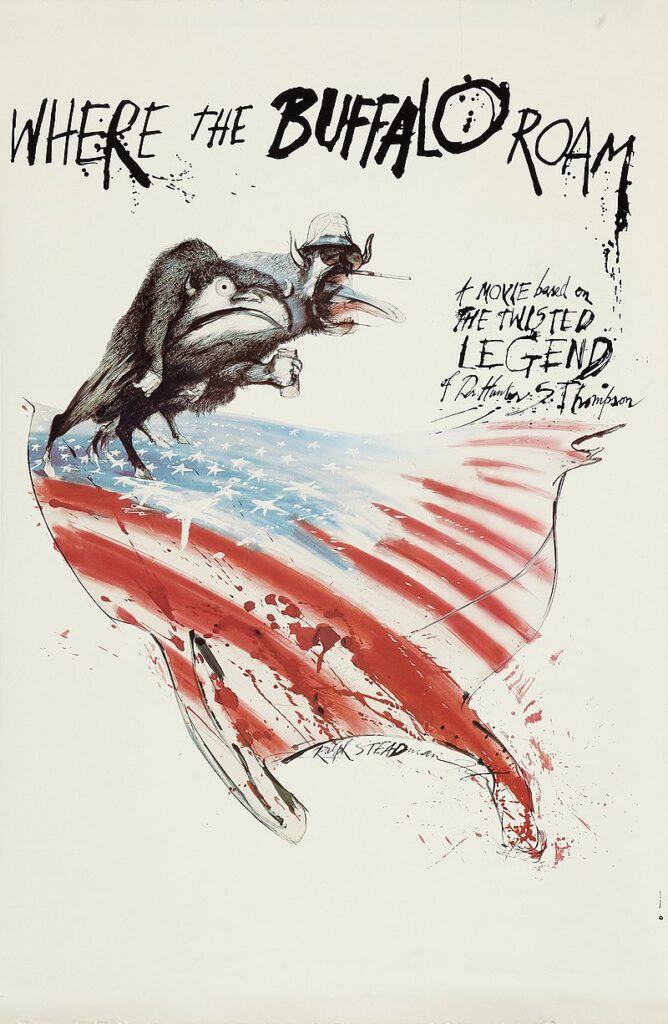 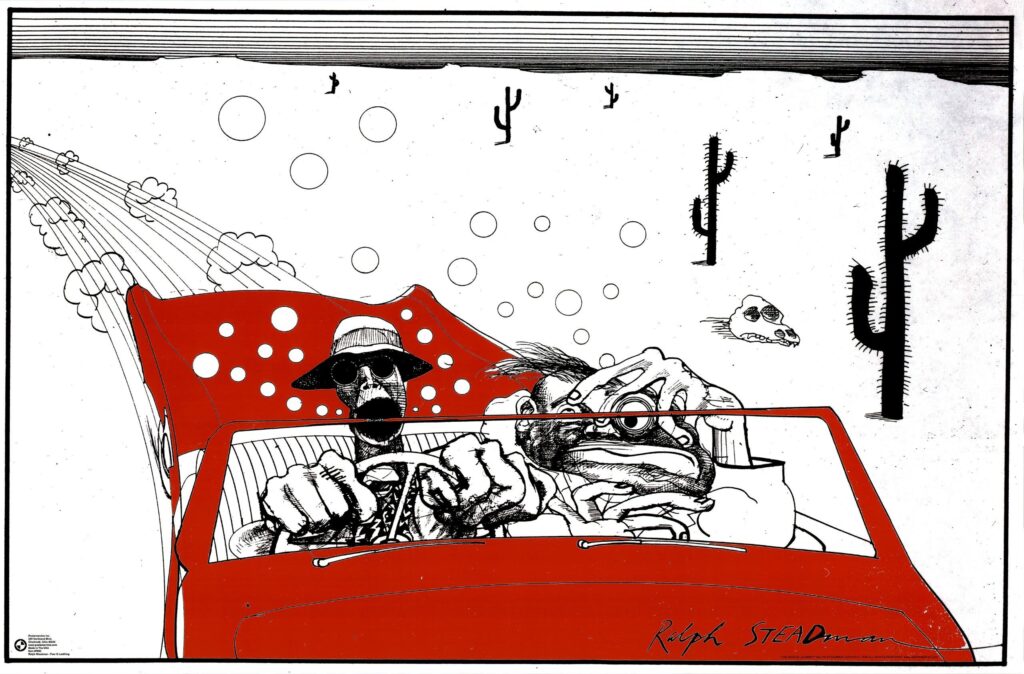