Canadian cartoonist born around 1920. James Simpkins grew up in Winnipeg. Manitoba. For several years he attended art school in Winnipeg, and during World War II he served in the Canadian army. On release in 1945, he began doing artwork for the Beaver (the Hudson’s Ray Company magazine) and the National Film Board of Canada. As a staff artist for the NFB for 16 years, he produced filmstrips for school use, and after leaving their regular staff, he continued to freelance for them. Simpkins’s work also includes gag cartooning and book illustration. In 1933 he submitted a design for a hockey stamp that was used by the Canadian Post Office Department. In the last ten years, Simpkins has had cartoons appearing regularly in the Medical Past anti has also done some advertising work. Simpkins’s most familiar creation is Jasper the Bear. Starting in 1948, Jasper appeared regularly in Maclean’s Magazine for over 24 years. Peter Newman, in an introduction to one of the published collections of Jasper cartoons, calls the bear ‘‘the Quintessential Canadian: using his wits (because he has few other weapons) . . . muddling through the most difficult situations with a kind, self-deprecating good humour that manages to salvage his self-respect, if little else.” Jasper finds himself in a variety of situations involving people who come holidaying into his environment. Occasionally, outside events dramatically penetrate Jasper’s world, as when the trans-Canada pipeline was built through his cave or when Jasper, looking down on people constructing a Bomarc missile base, commented to his woodland friends, “I wish we could do something before they become extinct.”

Jasper has been used by the Boy Scouts and has appeared on greeting cards and on bear warning posters in parks. He is also well represented in Jasper Park. Alberta, where his effigy is used in many ways. In the late 1960s and early 1970s Jasper was a Sunday comic strip distributed by Canada Wide Features. Currently, it is a panel syndicated by CLP Features to weekly newspapers across Canada. Most Canadians are familiar with Jasper the Bear. As Simpkins once said, “I thought I had created a new cartoon character. Now I know I was trapped by a bear.” 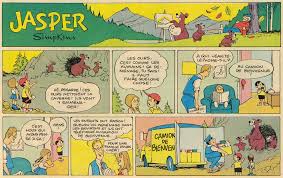