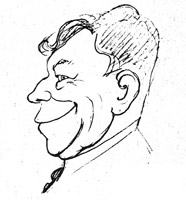 Was born to a family of the Don Cossak. Graduated from the Rostow Art College.
In 1916 his caricatures were first published in Bich magazine in Petrograd. Before Soviet regime, his works were published in Donskaya Volna & Rostowskaya Rech magazines. Since Soviets came to power he began collaboration with Don-ROSTA, Politprosvet, Rostow department of Gosizdat.
In 1921 began his study in the Petrograd Art Academy at the Graphic Faculty, but he described his experience in his autobiography as “was not studying, because during those times among the professors strange formalistic tendencies prevailed, which was alien to me”.
In 1921 moves from Rostow to Moscow. From 1922 to 1940 worked in Krokodil magazine. During that period also was published in many newspapers and magazines such as Pravda, Pabochaya Gazeta, Komsomolskaya Pravda, Gudok, Prozhektor, Ogonyok, Smehach, Chudak, 30 Dney, Lapot & others. In 1925 married Ekaterina Borisova, a famous children writer in the future.
At the New-York Exhibition in 1939 was created a panel based upon Rotov`s sketch.
He created illustrations for numerous books: About Hippopotamus by Samuil Marshak (1958), The Little Golden Calf by Ilf&Petrov (1931), The House Moved by Agniya Barto (1938), Captain Vrungel`s Adventures by Andrey Nekrasov (1939), Old man Hottabych by Lazar Lagin (1940), Unkle Styopa (1958), Three Little Pigs (1958) by Sergey Michalkov, and others.

Since June of 1940 the hardest and dramatic part of Rotov`s life started. He was arrested for promotion and stirring against Soviet regime with a cartoon he created in 1934. He was sentenced to spend 8 years in a correctional labour camp, where he stayed till the 4th of January 1948.

He spent his first term of imprisonment in Solykamsk, where his artistic talent continued to develop. There he created many paintings, the major part of which became a part of Solykamsk regional museum. With his refined painting talent, he created works which depicted not only severity and greatness of northern nature but also emotional climate among imprisoners.
When he was set free from the camp, he was denied to live in 100 cities of the country. He settled down in Kimri city in Tverskoy region. In December of 1948 he was sent to Severo-Eniseysk (Krasnoyarsk region) for life without accusations. There he worked as a decorator in a public Club for workers.
In 1954 he was exonerated by Militar Collegium of USSR Supreme Court with the explanation that further investigation did not fount ground to call his work anti-Soviet.
After liberation, he came back to Moscow and worked in Krokodil magazine as well as Vesyolye Kartinki and Uniy Tehnik.
Konstantin Rotov died on the 16th of January, 1959 and was buried at Vvedenskoe cemetery in Moscow.