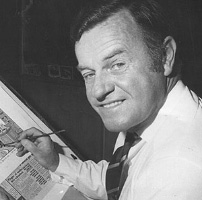 Writing in the international graphic arts magazine Gebrauchsgraphik in 1967. Ludwig Ebenoh said: “Many so-called cartoonists resort to the same ruse as schoolboys who hide their lack of graphic talent behind grotesque exaggerations. These people are neither entitled to nor capable of creating the message of genuine caricature. For the cartoon is a very difficult form of graphic art which does not tolerate inferior work. And yet the sure mastery of the technique of drawing is merely a natural prerequisite.” Paul Rigby is an artist who has mastered not only the technique but also the spirit of the cartoon.

Rigby was born in the Melbourne bayside suburb of Sandringham in 1924, and commenced to learn his craft at the Brighton Technical School. At the age of 15 he left school to work in a commercial art studio. In 1947 he left Melbourne, going west on his way to England, but he was offered and accepted a position as an illustrator in western Australia on the old Perth Western Mail. In 1952 he went to the Daily News as that paper’s editorial cartoonist.

It was 20 years before he continued his journey to England, in 1969 joining the London Sun. In London Rigby experienced the great distinction of being given various cartooning assignments involving travel to China, the United States, the Soviet Union. Europe and Vietnam. He also worked directly for the Springer group of Germany and for the American National Star. Throughout this period his cartoons were being syndicated back in Australia. He returned to Australia and the Sydney Daily Telegraph in 1975, and in 1977 he moved to the United States to work for the New York Post.

The inevitable comparison is always made between Rigby’s style and that of the English cartoonist Carl Giles. The similarities are natural; in the United States Pat Oliphant is experiencing the same form of flattery. Rigby’s work produced in Australia, like that of Giles, has always been drawn to a “landscape” format—more wide than deep, using a complexity of figures in an appropriate locale. And he exploits this format with his mastery of involved and dauntless perspective drawing. He has won five Australian Walkley Awards for the best editorial cartoon of the year, and there have been twenty or so books of his collected cartoons published since the first one in the 1950s.