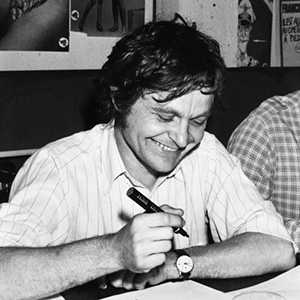 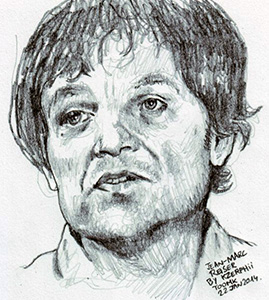 French cartoonist born at Rehon, in eastern France. J.M. Reiser was taken to Paris as a child; after completing his high school studies at the Lycee Arago, he briefly worked as an errand boy (like Daumier, as Reiser is fond of reminding people). He became one of the first collaborators on the satirical weekly Нага-Kiri in the early 1960s, and he soon proved himself one of the most acute observers (and dissectors) of the modern scene. His cartoons were filled with aggressive, ugly, smug and wrongheaded people whose stupidity was expressed in well-worn cliches enclosed in word balloons (Reiser seldom uses captions). His attacks on prominent personalities (notably French presidents De Gaulle and Pompidou) put him in direct conflict with the authorities (again like Daumier).

From the middle 1960s to the early 1970s Reiser also worked for the comic weekly Pilote. His caustic comments on current events and his continued sniping at established authority were a welcome relief from the rather staid contents of the rest of the paper. In recent years Reiser has been working exclusively for Hara-Kiri and its companion publications, Charlie and Charlie Hebdo. He is also the author of a few unsuccessful comic strips and has had several books of his cartoons published.

Reiser is regarded as one of the most representative cartoonists of his generation. His aggressive, sloppy drawing style and his cynical observations are much admired and imitated by countless aspiring cartoonists who duplicate his vulgarity without being able to match his talent.