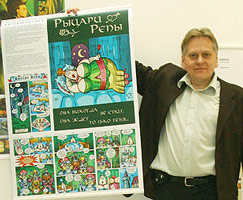 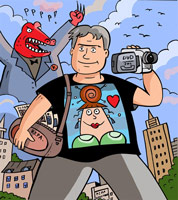 From 1980 to 1998 was a freelance cartoonist of Krokodil magazine.
From 2003 to 2005 his caricatures appeared weekly at the Ministry of Education web site. Since 2005 has been drawing for a Russian conservative weekly Vremya.
Illustrated 20 books for the publishing companies Mnemozina, Prosveschenie, Karapuz.
He is the author of 200 humor postcards. Draws stripes for Schrumdirum magazine. Author of webcomic series Knights of Turnip and strip series Pal Palych.
Member of the Creative Union of Russian Artists since 2001.