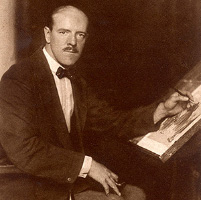 Frank Reynolds, the son of William George Reynolds, the artist, was born in London. After studying at Heatherley’s School of Art, Reynolds began working for Illustrated London News. He also produced cartoons for several other journals.

Reynolds first began contributing to Punch Magazine in 1906. He also provided the illustrations of several books by Charles Dickens including David Copperfield (1911), The Pickwick Papers (1912) and The Old Curiosity Shop (1913). A fellow cartoonist, Cyril Bird, described Reynolds as “a latter-day” John Leech.

During the First World War Reynolds cartoons appeared regularly in Punch Magazine. As Mark Bryant has pointed out: “Though he drew many varieties of cartoon he is particularly remembered for his anti-Kaiser pictures in Punch during World War I, notably the famous Study of a Prussian Household Having its Morning Hate.”

Reynolds contributed to several journals including The London Magazine, The Sketch and the The Windsor Magazine. Reynolds replaced F. W. Townsend, his brother-in-law, as Art Editor of the magazine in 1920 and held the post until 1930.